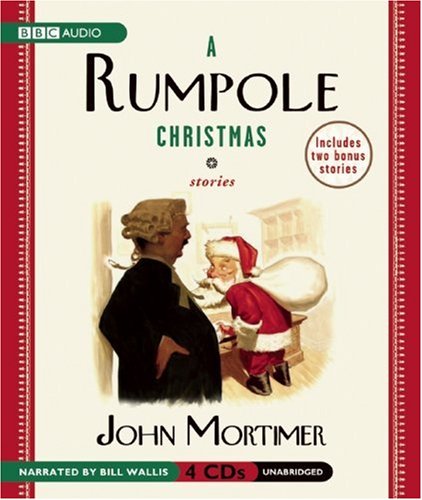 A Rumpole Christmas is a collection of five holiday stories never before published in book form depicting the Old Bailey Hack at his lovable best. In Rumpole and Father Christmas,” the English barrister encounters a familiar-looking Santa who he thinks is a thief. In Rumpole’s Slimmed Down Christmas,” he goes to a new-age spa when She who must be obeyed” insists that he lose a few pounds. In Rumpole and the Christmas Break,” he protects Hilda as a shady judge flirts with her while on a holiday that turns out to be anything but relaxing. In Rumpole of the Bailey’s Christmas Party,” Rumpole celebrates the holiday with Old Bailey colleagues and Hilda surprises him with an unexpected gift. And in Rumpole and the Old Familiar Faces,” he uses a former client’s seedy past to aid a church in the name of Christmas spirit.

John Mortimer is a playwright, novelist, and former practicing barrister who has written many film scripts as well as stage, radio, and television plays, the Rumpole plays, for which he received the British Academy Writer of the Year Award, and the adaptation of Evelyn Waugh’s Brideshead Revisited. He is the author of twelve collections of Rumpole stories and three acclaimed volumes of autobiography.

As listeners would expect, Horace Rumpole spends his holidays in the Old Bailey, defending a terrorism suspect, among others, and seeking truth, including the possibility that two former clients have gone straight. Bill Wallis's Rumpole sounds a bit wearier than Leo McKern's definitive version but retains his passion for justice and sense of humor. Wallis also creates the perfect voice for Judge Graves, a frequent Rumpole adversary. Since this is a Christmas volume, Mortimer treats listeners to a couple of lighter stories, including Rumpole's misadventures with a Christmas party and online shopping. Whether listeners have heard them before or not, the stories have a familiar feel (Rumpole gives She Who Must Be Obeyed lavender water every year). This will prove an enjoyable Christmas treat for fans. J.A.S. © AudioFile 2009, Portland, Maine

Book Description BBC Audiobooks, 2009. Audio CD. Condition: Good. Audio book. Minor surface scratches to the discs. Good condition is defined as: a copy that has been read but remains in clean condition. All of the pages are intact and the cover is intact and the spine may show signs of wear. The book may have minor markings which are not specifically mentioned. Most items will be dispatched the same or the next working day. Seller Inventory # mon0012143692