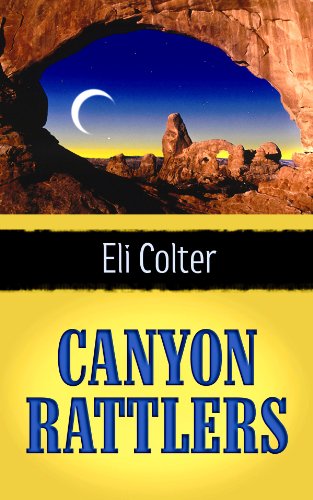 Black Desmond was a swashbuckling, dashing figure -- one of the most brutal and murderous the Southwest had ever known. Now he has transferred his rustling, robbing, and killing operations to a sparsely settled area of Montana. And it's there that he meets his match in Sheriff Wyster and his posse.

In the desperate running battle with Desmond's gang, two of the sheriff's sons are killed. But Wyster's son Alvin still lives -- and so does the young son of Black Desmond.

Eli Colter (1890-1984) was the pen name of May Eliza Frost, author of numerous novels, Westerns, and mystery and horror stories. She submitted her first story to Black Mask Magazine in 1922 and also submitted many stories and serials to Weird Tales magazine. Her western story ''Something to Brag About'' was printed in the Saturday Evening Post and later adapted for the screen in 1948 as The Untamed Breed.

Book Description Center Point, 2010. Condition: Good. Lrg. Ships from Reno, NV. Former Library book. Shows some signs of wear, and may have some markings on the inside. Seller Inventory # GRP99208367

Book Description Center Point Large Print. Library Binding. Condition: Good. A copy that has been read, but remains in clean condition. All pages are intact, and the cover is intact. The spine may show signs of wear. Pages can include limited notes and highlighting, and the copy can include previous owner inscriptions. An ex-library book and may have standard library stamps and/or stickers. At ThriftBooks, our motto is: Read More, Spend Less. Seller Inventory # G160285856XI3N10

Book Description Center Point Large Print. Library Binding. Condition: Very Good. A copy that has been read, but remains in excellent condition. Pages are intact and are not marred by notes or highlighting, but may contain a neat previous owner name. The spine remains undamaged. At ThriftBooks, our motto is: Read More, Spend Less. Seller Inventory # G160285856XI4N00

Book Description Center Point Pub, 2010. Condition: Good. A+ Customer service! Satisfaction Guaranteed! Book is in Used-Good condition. Pages and cover are clean and intact. Used items may not include supplementary materials such as CDs or access codes. May show signs of minor shelf wear and contain limited notes and highlighting. Seller Inventory # 160285856X-2-4