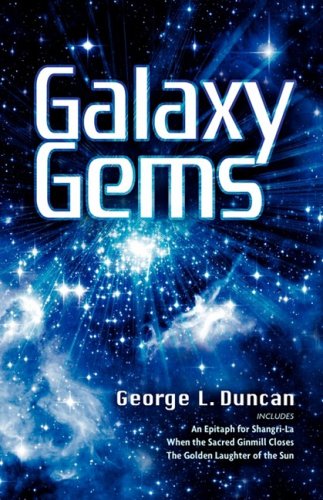 Think the 21st century is bad? Just wait until the 23rd.... Fighting aliens. Combatting hostile insectoids. Solving cosmic mysteries. Exploring the galaxy. Battling demonic opponents. It's just another routine day at the office...if you're a Spacehawk, that is. Love. Honor. Sacrifice. Duty. Blood and Death. For squadron members Trent Bartley, Tequesta Lynquest, Lupe Martinez, and Sebastian McCloud, it's a great life.if you survive. Includes 8 masterful tales by critically-acclaimed sci-fi and mystery/detective writer George L. Duncan. Galaxy Gems The Spacehawks return to Kali, the closest thing to hell this side of the inferno. An Epitaph for Shangri-La Why would a sophisticated, intelligent race commit mass suicide? The Golden Laughter of the Sun An afternoon tease-and-tickle leads to meeting the race of Solarians. We Few, We Happy Few In the midst of savagery and evil, is it possible to find joy? When the Sacred Ginmill Closes McCloud must choose between a gritty, dangerous reality and an eternity of pleasant fantasies. Counterfeit World In the frozen world of the Trokans, what's illusion? What's real? No Eye Hath Seen What he sees could drive him mad.or forever change what he believes. The Ponce de Leon Project To what lengths would you go to live forever?

This book is a collection of stories sold to various e-magazines, and one has an interesting tale behind it.  An author from Australia was putting together an anthology and accepted "Eye of the Beholder." After the book was published he got a Christian and an atheist to review it. Surprisingly, they agreed about 80 percent of the time. Both critics liked "Beholder" although the Christian rated it a bit higher than her non-believing colleague. One of the writers in the book also reviewed in on her web site and gave an enthusiastically thumbs up to "Beholder."
The book contains my first "Spacehawk" story which was the start of the writing career.