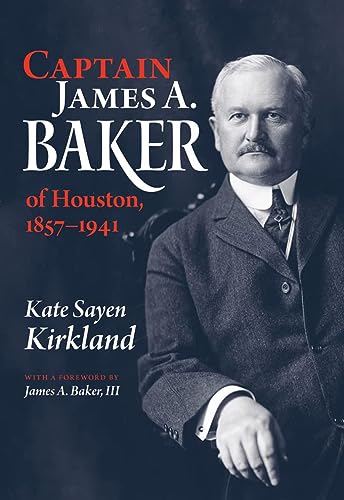 Captain James A. Baker, Houston lawyer, banker, and businessman, received an alarming telegram on September 23, 1900: his elderly millionaire client William Marsh Rice had died unexpectedly in New York City. Baker rushed to New York, where he unraveled a plot to murder Rice and plunder his estate. Working tirelessly with local authorities, Baker saved Rice’s fortune from more than one hundred claimants; he championed the wishes of his deceased client and founded Rice Institute for the Advancement of Literature, Science and Art—today’s internationally acclaimed Rice University.

Author Kate Sayen Kirkland explored the archival records of Baker and his family and firm and carefully mined the archives of Baker’s contemporaries. Published as part of Rice University’s centennial celebration, Captain James A. Baker of Houston, 1857–1941 weaves together the history of Houston and the story of an influential man who labored all his life to make Houston a world-class city.

KATE SAYEN KIRKLAND, a freelance writer and editor based in Houston, has previously written a book on the influential Hogg family, and her work has also appeared in the Southwestern Historical Quarterly. She holds a PhD from Rice University.

"This deeply researched, richly detailed work is absolutely essential reading for anyone interested in the history of Rice University and the five critical decades of Houston's history following 1890. Written with clarity and verve, it demonstrates James A. Baker's key role as a cultural and institutional leader."--John B. Boles, William Pettus Hobby Professor of History, Rice University

"A first rate biography of a man who saved Rice University, built a major law firm, and contributed mightily to the development of modern Houston."--E. William Barnett, retired managing partner of Baker Botts L.L.P.; retired chair of the board of trustees, Rice University

"In September 1900, after a hurricane destroyed Galveston, William Marsh Rice was murdered by a valet who had forged a new will. The steady and shrewd James A. Baker fought to obtain justice and preserve his friend's legacy, in the form of a great university. Kate Kirkland describes in lively language this and other watershed events for Houston and Texas. She brings to life Captain Baker's remarkable career as a lawyer, businessman, civil leader and patriarch. Anyone interested in the history of Texas will enjoy Kirkland's great book."--Bill White, Houston businessman and former mayor and Deputy Secretary of Energy of the United States

"Kate Kirkland's biography of lawyer, banker, and civic leader James A. Baker provides fascinating insights into how power was consolidated and administered in early twentieth-century Houston as Baker and his associates lay the foundations that would support Houston's emergence on a world stage in the second half of the century."--Stephen Fox, architectural historian

"Kate Kirkland's masterful biography of Captain James A. Baker tells not only one man's and his forebears inspirational story, but also traces the amazing growth of Houston during his lifetime and with his powerful influence. Ms. Kirkland has done a great service to Houston and Houstonians by revealing thru Captain Baker's life the many threads of cultural, social, and entrepreneurial life that have made Houston the tremendous international city it has become."--Joanne Seale Wilson, co-author of Houston's Silent Garden: Glenwood Cemetery, 1972-2009