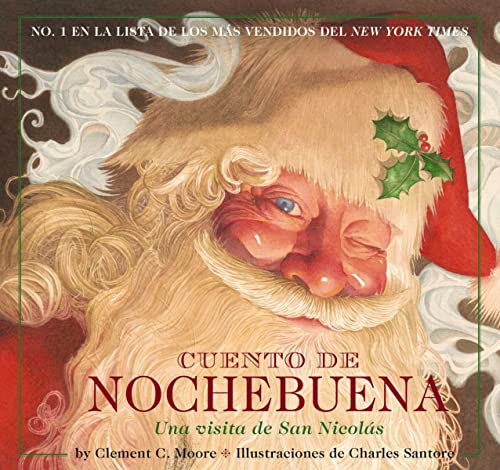 This beautiful board book edition of the #1 New York Times best-selling Night Before Christmas is now translated into Spanish, making the ultimate addition to any Spanish-speaking family’s home library for Christmas time reading.

Full-color, original artwork by award-winning illustrator Charles Santore is faithfully reproduced on sturdy board stock that will withstand rereading and repeated handling without tearing or fraying. Magnificent spreads capture the sights and sounds of Christmas, and reinforce the spirit and cheer of jolly ole’ St. Nicholas. Reading this most-loved poem is a classic family tradition and adds a magical component to every child’s Christmas!

Charles Santore is a renowned children’s book illustrator whose work has been widely exhibited in museums and celebrated with recognitions such as the prestigious Hamilton King Award, the Society of Illustrators Award of Excellence, and the Original Art 2000 Gold Medal from the Society of Illustrators. Santore is best known for his luminous interpretations of classic children’s stories such as Snow White, The Little Mermaid and Henry Wadsworth Longfellow’s Paul Revere’s Ride, which was named 2004 Children’s Book of the Year for Poetry by the Bank Street College Children’s Book Committee. His illustrations for The Wizard of Oz, which is widely considered to be the quintessential illustrated version, were used as the scenic backdrops for a major television performance of the work. Charles Santore lives and works in Philadelphia.

Charles Santore is a renowned illustrator and his many awards include the Society of Illustrators Award of Excellence, the Alumni Award of the Philadelphia College of Art, and the Hamilton King Award. Charles Santore’s illustrations are part of the permanent collections of the Brandywine River Museum, Chadds Ford, PA; The Free Library of Philadelphia; New York City’s Museum of Modern Art; The United States Department of the Interior and many private collections.