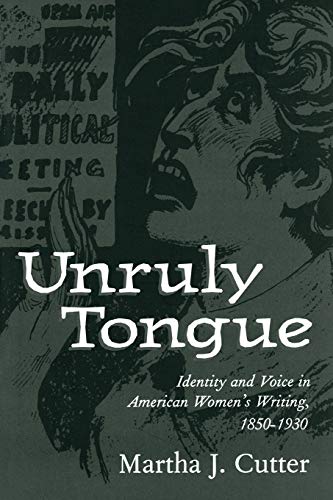 "Women should be seen and not heard." That was a well-known maxim in nineteenth century America.

American women writers--such as Louisa May Alcott, Kate Chopin, and Willa Cather--devised a brilliant method for crashing that barrier to creativity. In her new book, UNRULY TONGUE: IDENTITY AND VOICE IN AMERICAN WOMEN'S WRITING, 1850-1930 (University Press of Mississippi, $40, cloth) Martha Cutter says the ten African American and Anglo American women she studied wrote as inside agitators. Over time they created a new theory of language.

Cutter says, "From 1780 to 1860 American writers were preoccupied with the feminine virtues of purity, piety, submissiveness, and domesticity--a constellation of attributes known as the domestic saint, or True Woman."

But that soon changed. As more women were educated and more women began to work outside the home, women writers found a need to express themselves with a growing sense of independence.

In the first years covered by her book, Cutter found writers Fanny Fern, Harriet Wilson, and Louisa May Alcott employing female characters who stayed within their domestic roles and stuck to a very submissive script.

"The years from 1850 to 1930 reflected a great deal of cultural change," Cutter says, "as the New Woman gradually displaced the True Woman, and the domestic voice was replaced by one that was more concerned with the theoretical basis of women's silencing."

These writers enabled those that followed, such as Willa Cather and Jessie Fauset, to create characters with masculine and racist voices and undermine those characters from the inside.

Throughout her book, Cutter discovers how these ten writers, even those who wrote in what appears to be a purely feminine and domestic voice, found ways to rethink language and create new identities and new voices that were both feminine and unruly.

Martha J. Cutter is assistant professor of English at Kent State University. She has contributed critical essays to Mary Wilkins Freeman: A Study of Short Fiction, The Politics of Passing, The Canon in the Classroom, and many scholarly journals.