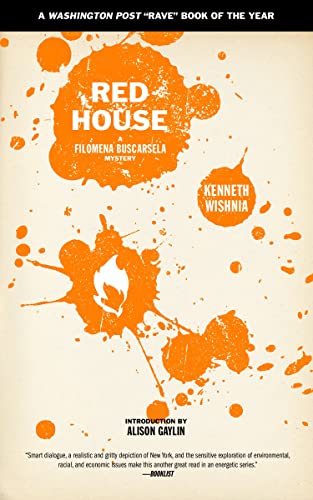 Kenneth Wishnia is an associate professor of English at Suffolk Community College and the author of the Filomena Buscarsela Mystery series, the first of which was nominated for both the Edgar and the Anthony Awards, and made the Booklist “Best First Mystery” list. He is also the author five other novels, including The Fifth Servant. He lives on Long Island. Alison Gaylin is the author of the bestselling And She Was; Heartless; the Edgar Award–nominated Hide Your Eyes; Trashed; and You Kill Me. She lives in New York City.

Ex-cop Filomena Buscarsela, recovered from the troubles that dogged her in The Glass Factory (2000), brings her sharp tongue and sharper mind back to New York City in this slightly confusing tale. Here she's serving an apprenticeship at an established PI firm, but her cases tend to cost the firm nearly as much as she brings in. Always fighting for the underdog, Buscarsela finds herself helping an elderly Hispanic woman whose son is missing, and another woman whose husband, in a moment of insanity, drew a gun on five police officers in a crowd. Breaking a bootlegging ring gets Buscarsela money, but it gets her shot at as well. Her biggest case involves the apparent mugging of Manny Morales, a guy who worked with developmentally disabled children, but was better known as an agitator for tenants' rights. The somewhat tangled thread that ties together Buscarsela's cases is an old factory building that's been occupied by squatters for the past 10 years. This motley if basically responsible group of tenants provides Buscarsela with useful information, sometimes inadvertently, but it's the building itself that holds the most important key. An engaging character with an intimidating determination and at times an over-the-top exuberance, Buscarsela balances a fierce personality with an appealing manner toward her 12-year-old daughter, Antonia, and a wry sense of humor. The jam-packed plot makes for an exciting story, but the disparate sideshows are difficult to keep straight, and Wishnia plays the ethnicity card a little too often. (Nov. 12)for an Edgar.

Book Description PM Press. PAPERBACK. Condition: New. 1604864028 Brand New; satisfaction guaranteed. Trade paperback binding. First she was a beat cop, then she was unemployed. Now, Kenneth Wishnia?s dynamic Filomena Buscarsela has apprenticed herself to a New York City PI firm to put in the three years necessary to get her own PI license, which she needs to earn enough money to support herself and her daughter. Trouble is, she often agrees to take on sticky neighborhood cases pro bono?like the group of squatters restoring an abandoned building in the neighborhood?rather than handle the big-bucks clients her bosses would prefer.While helping out her more ?senior? colleagues with her own superior investigative techniques bred from years on the beat, Fil agrees to look into the disappearance of a young immigrant. Then, witnessing the arrest of a neighbor on marijuana-possession charges that nearly turns into a shoot-out with the police, Fil is roped into finding out what went wrong. Trying to balance charity cases like these with bread-and-butter cases, not to mention single motherhood, Fil is quickly in over her head dodging bullish cops, aggressive businessmen, and corrupt landlords in their working-class Queens neighborhood.After years of policing and backstreet bloodhounding, Filomena Buscarsela is apprenticing to earn her own private investigator?s license. She pours on her Spanish, her clever tricks, and her battle-tested charms to uncover a labyrinth of deceit, racial prejudice, and impenetrable bureaucracy that not only rocks her neighborhood but also threatens the foundation of the big red house that is this PI?s America. Seller Inventory # SKU12130580