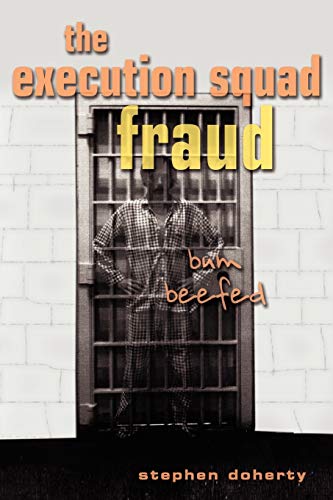 In the mid-1970s, Walpole State Prison had the highest murder rate of any prison in the country, and the lowest conviction rate: zero. The District Attorney's office had been pilloried by the press for its inability to get results.
So when a particularly atrocious murder occurred on Thanksgiving Day, 1976, and an inmate offered to testify that he'd seen who did it, DA William Delahunt jumped at the offer.
The DA's office and state police framed Stephen Doherty for the crime. It took him twenty years to prove that he was innocent.
This is his story.

On Thanksgiving Day, 1976, an inmate named Robert Perrotta was found brutally murdered in his cell. His penis had been torn from his body, while he was still alive, and stuck in his mouth.

That was generally not a good sign. After the evening meal, everything was pretty much recreation and relaxation. To hear your name over the loudspeaker at that time of night usually meant bad news, possibly notification of a death in the family at home.

A while later I heard, "John Campbell, please report to inner control. Campbell, report to control."

This definitely caught my attention and changed my perception of the calls. Two guys from my block -- both from my hometown of Charlestown -- being called out on the night after a murder had occurred in our block was not a good sign. I came out of my cell and looked around. I noticed that other guys were doing the same thing.

A little while later, Jackie Campbell came down the back stairway. I lived in cell 12, the last cell on the right-hand side of the bottom floor (the flats). The stairs were right next to my cell.

Jackie stopped at my door. He asked, "Did ya hear them call me?"

I nodded, "Yeah. I heard them call Arthur earlier. Is he back yet?"

Jackie shook his head. "No. I checked his cell before I came down."

Jackie and Arthur both lived on the third tier. So hadn't Bobby Perrotta.

I asked, "If you're not back by lock-in, you want me to call someone for ya in the morning?"

He nodded his head, "Yeah."

My hair stood on end. I had never even considered that I would be called. A few weeks earlier, I had been okayed for a transfer to MCI Framingham to be let out on work release. Framingham was a coed (but mostly women's) prison. It was just a question of waiting for the paperwork to come back from the main office of the Department of Correction (DOC) in Boston. In the meantime, I had been doing my best to keep as low a profile as possible. There was no way that I was going to get involved in anything. Once you're that close to getting out, you don't even like to come out of your cell. In a place like Walpole, in the seventies, you never knew from one moment to the next what was going to happen. Fights, murders, riots, and lots more were commonplace. They were just part of the environment.

I came out of my cell, went up the back stairs to the third tier, and walked over to Campbell's cell. He wasn't there.

There were guys standing on the tier, leaning on the railing. I asked, "Did Jackie come back?" Even though I already knew the answer, I had to ask. They just shook their heads.

One of the guys standing there was from Charlestown. I called him off to the side and said, "If I'm not back by count time [10 pm, when they locked us in our cells for the night and took the count], I want you to call my lawyer for me in the morning."

I gave him my lawyer's number. "His name is Alan Caplan. Thanks."

I then went to the cell of another guy from Charlestown and repeated the process.

I went back down to my cell and got dressed. Even though inner control was just down the corridor and did not require me to go outside, I dressed warmly, taking a winter coat and gloves. I even put on my sunglasses. It was almost December, and Keigney and Campbell had yet to return. Who knew where I was going to wind up?

As I came out of my cell, I had another thought. So far, they had called three people -- all from Charlestown. The two guys that I had arranged to call my lawyer were both townies. How did I know that they weren't being called next? I went back upstairs. I gave Al Caplan's number to two other guys, neither of whom were from Charlestown.

When I got to inner control, one of the correctional officers (COs) behind the bulletproof glass said, "They wanna see you out in counseling."

Inner control is a large, circular, and secure room at the center of Walpole from where certain gates and solid steel doors were controlled. These doors included two on the left of control, which led out to the visiting room, and two on the right that led to the counseling area.

I went through the doors and turned right, into the counseling section. It consisted of an open area, maybe thirty square feet, which was surrounded by about ten small offices. The offices were about seven or eight square feet. At this time of night, they were all empty, except one.

There were two large guards, probably about three hundred pounds each, standing outside one of the offices. They waved me over and into the office.

I walked into the office and realized that there was barely room for me. Sitting behind the desk was the warden, Fred Butterworth. He introduced me to the two suits sitting next to him. One was an assistant district attorney (ADA) named John Prescott. He introduced the other as a chemist. There were two or three others standing off to the side. One of them was a state police detective named William Bergin.

Fred Butterworth was one of the last wardens to actually start as a guard and work his way up through the ranks. He was a small guy. Picture James Cagney with a totally pockmark-scarred face and a high-pitched voice. He was a pretty harmless-looking guy, but looks can be deceiving.

After the introductions, Fred said, "Steve, we're going to do a test on you. The chemist is going to scrape under your fingernails."

That was fine with me. I had been nowhere near Bobby Perrotta on the day he was murdered.

I said, "Sure, but I wanna call my lawyer first."

He just shook his head and repeated himself. "No lawyers."

That got my hackles up. I looked at the prosecutor and said, "You're a lawyer. Is this legal?"

He didn't respond, at least not verbally. He obviously hadn't expected the question, immediately glanced at Fred, and then looked down at the desk.

"I said, 'No lawyers,'" Fred reiterated.

I thought for a minute. Then, removing my sunglasses and handing them across the desk, I said to the prosecutor, "Here, would you mind holding these for a minute?"

He looked startled but automatically took my glasses.

Stepping back from the desk, I folded my arms and placed my hands under my armpits. I said, "I have nothing to hide. But, if you're not going to allow me to speak to my attorney, I can't cooperate."

We all stood there for a long, silent minute.

Finally, Fred said, "Get him."

The two over-nourished guards grabbed me from behind. I didn't fight back. I simply resisted. After a few minutes of squirming contention, they had me lying on my stomach, across the desk. Both of them were lying on top of me. One of my arms was twisted up behind my back. The other was stretched out in front of me while the chemist scraped under my fingernails. They reversed arms, and then it was over. They released me, and I stood up.

I held out my hand to John Prescott for my glasses and said, "Thank you."

Fred came out from behind the desk, walked out of the room, and said to me, "Come with me."

Fred turned around and, seeing the guard, waved him out of the office. "Wait outside," he said.

The guard hesitated for a minute. He said, "Are you sure? You wanna be in the room alone with . . ."

Fred cut him off; waving his arm again, his voice rising, "Get out, I said. Get out."

The guard quickly stepped out and closed the door.

Surprised, I quipped, "Have I got a vote?"

Impatiently, he asked, "Are you gonna start your shit?"

Confused, I asked, "What shit?"

When I had first walked into Walpole, back in February 1973, it was right in the middle of the Porelle lock down. The whole joint was locked down for seventy-nine days -- no showers, nothing. It was also the peak of the burgeoning national prison reform movement that was a direct result of the massacre at Attica state prison in New York about a year and a half earlier. I wound up in the middle of it as the National Prisoners Reform Association (NPRA) representative of the New Man's Block. The notoriety stuck, and Fred had a long memory.

I said, "Hey Fred, that stuff's fun, but you're talkin' about a murder here. This is for real."

"You give me your word that you won't start any of that shit," he said.

He nodded his head. "Give me your word," he said.

He opened the door and said to the guard, "Take him to my office, and let him use the telephone."

Fred had been a hard, old-time guard, but his word was good. It was one thing we had in common. In all the years I knew him, I never saw him break his word. He'd kick your ass and throw you in the hole if he felt like it, but he wouldn't break his word.

The guard took me to Fred's office, and I called Al Caplan at home and told him what happened. After we spoke, I was returned to my block. Arthur and Jackie were both back in the block. They had had their fingernails scraped too.