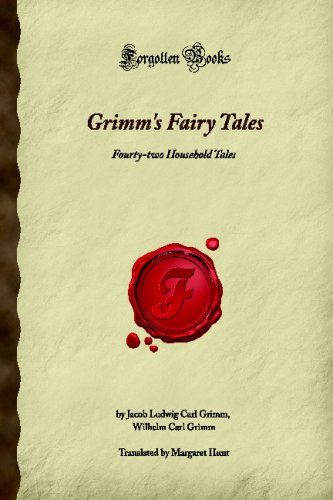 In 1803, the Grimms met the Romantics Clemens Brentano and Ludwig Achim von Arnim at the University of Marburg. These two men stirred in the brothers an interest in ancient fairy tales. They started to collect and write down tales that they alleged had been handed down for generations. Among their sources were Dorothea Viehmann, and two Huguenot families, Hassenpflug and Wild, who introduced them to several tales of French origin.

The first volumes were much criticized because, although they were called "Children's Tales", they were not regarded as suitable for children, both for the scholarly information included and the subject matter. Many changes through the editions-such as turning the wicked mother of the first edition in Snow White and Hansel and Gretel to a stepmother, were probably made with an eye to such suitability. They removed sexual references, such as Rapunzel's betraying the prince by asking why her clothing no longer fit, and so revealing her pregnancy, but in many respects, violence, particularly when punishing villains, was increased.

The tales were also criticized for being insufficiently German; this not only affected the tales they included, but their language as they changed "Fee" (fairy) to an enchantress or wise woman, every prince to a king's son, every princess to a king's daughter. They also went to considerable effort to "reconstruct" the tales, merging variants (particularly fragmentary ones) and attempting to amend corruptions.

They also added a prologue discussing the extent to which such tales were not, in fact, German, citing the many English and Norwegian analogies to the tales they had collected, and that the most extensive similarities were to Serbian fairy tales; they pointed to the Indian and Persian equivalents as proof that the tales came with the languages as part of the Indo-European heritage.

In 1825 the Brothers published their Kleine Ausgabe or "small edition," a selection of 50 tales designed for child readers. This children's version went through ten editions between 1825 and 1858." (Quote from wikipedia.org)

Publisher's Preface; The Frog-king, Or Iron Henry; Our Lady's Child; The Wolf And The Seven Little Kids; Faithful John; The Pack Of Ragamuffins; Rapunzel ; The Three Little Men In The Wood; The Three Spinners; Hansel And Grethel; The Fisherman And His Wife ; The Valiant Little Tailor; Mother Holle; The Seven Ravens; Little Red-cap ; The Bremen Town-musicians; The Girl Without Hands; Clever Elsie; Thumbling; Thumbling As Journeyman; The Six Swans; Little Briar-rose; Fundevogel ; King Thrushbeard; Little Snow-white; Rumpelstiltskin; The Three Feathers; The Golden Goose; Allerleirauh; The Wolf And The Fox; Hans In Luck; The Goose-girl; The Peasant's Wise Daughter; The Spirit In The Bottle; Bearskin; The Willow-wren And The Bear; Wise Folks; The Ungrateful Son; The Shroud; The Two Kings' Children; The Seven Swabians; One-eye, Two-eyes, And Three-eyes; Snow-white And Rose-red
<

"Jacob Ludwig Carl Grimm
Jacob Ludwig Carl Grimm (Hanau, January 4, 1785 - September 20, 1863 in Berlin), German philologist, jurist and mythologist, was born at Hanau, in Hesse-Kassel. He is best known as the author of the monumental German Dictionary, his Deutsche Mythologie and more popularly, as one of the Brothers Grimm, as the editor of Grimm's Fairy Tales.

He was born in Hanau, Hesse-Kassel and in 1803 he started studying law at the University of Marburg, one year after his brother Jacob did the same.

From 1837-1841 the Grimm Brothers joined five of their colleague professors at the University of Gottingen to form a group known as the Gottingen Sieben (The Gottingen Seven). They protested against Ernst August, King of Hanover, whom they accused of violating the constitution. All seven were fired by the king.

Grimm died in Berlin at the age of 73.

Book Description Forgotten Books, 2008. Paperback. Condition: Good. Connecting readers with great books since 1972. Used books may not include companion materials, some shelf wear, may contain highlighting/notes, may not include cdrom or access codes. Customer service is our top priority!. Seller Inventory # S_276922671

Book Description Forgotten Books, 2008. Condition: Good. A+ Customer service! Satisfaction Guaranteed! Book is in Used-Good condition. Pages and cover are clean and intact. Used items may not include supplementary materials such as CDs or access codes. May show signs of minor shelf wear and contain limited notes and highlighting. Seller Inventory # 160506775X-2-4

Book Description Forgotten Books, 2008. Paperback. Condition: GOOD. Has little wear to the cover and pages. Contains some markings such as highlighting and writing. Seller Inventory # 160506775X_abe_gd