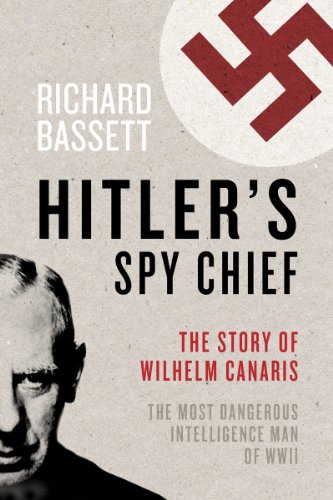 A remarkable tale of espionage and intrigue―the story of Wilhelm Canaris, Hitler’s intelligence chief, and his role in the conspiracy to assassinate the Führer.

Admiral Wilhelm Canaris was appointed by Hitler to head the Abwehr (the German secret service) eighteen months after the Nazis came to power. But Canaris turned against the Führer and the Nazi regime, believing that Hitler would start a war Germany could not win. In 1938 he was involved in an attempted coup, undermined by British Prime Minister Neville Chamberlain.

In 1940 he sabotaged the German plan to invade England, and fed General Franco vital information that helped him keep Spain out of the war. For years he played a dangerous double game, desperately trying to keep one step ahead of the Gestapo. The SS chief, Heinrich Himmler, became suspicious of Canaris and by 1944, when Abwehr personnel were involved in the attempted assassination of Hitler, he had the evidence to arrest Canaris himself. Canaris was executed a few weeks before the end of the war.

In a riveting true story of intrigue and espionage, Richard Bassett reveals how Admiral Canaris’s secret work against the German leadership changed the course of World War II.

Richard Bassett has worked in the City for the last fifteen years advising several of Europe’s largest companies. Previously he worked in Central Europe for many years, first as a professional horn player and then as a staff correspondent of the London Times in Vienna, Rome, and Warsaw, where his dispatches covered the end of the Cold War and gave early warning of the impending disintegration of Yugoslavia. He divides his time between London and the Continent.

“An illuminating history.”
- The Financial Times

“Canaris himself emerges from these pages as a remarkable man, unassuming and modest, but with an iron will, great courage and a subtle intelligence, who thought that the dirty work of spying became less sordid if conducted by gentlemen.”
- The Literary Review (London)