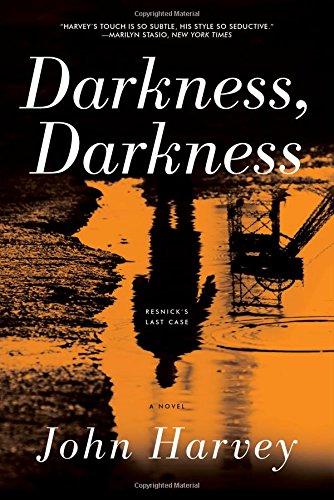 Charlie Resnick, recently promoted to Detective Inspector and ambivalent, at best, about some of the police tactics used in the Strike, had run an surveillance-gathering unit at the heart of the dispute.

Now, in virtual retirement, the discovery of the body of a young woman who disappeared during the Strike brings Resnick back to the front line to assist in the investigation into the woman’s murder―forcing him to confront his past―in what will assuredly be his last case . . . as well as John’s Harvey’s final Charlie Resnick novel.

John Harvey has been writing crime fiction for more than forty years. The first novel of his twelve-part Charlie Resnick series, Lonely Hearts, was selected by The Times of London as one of the “100 Best Crime Novels of the Century.” His novels featuring Frank Elder include Flesh & Blood, which won the Silver Dagger Award and a Barry Award, and Ash & Bone, which was nominated for a Los Angeles Times Book Award. He was awarded the CWA Cartier Diamond Dagger for sustained excellence in the crime genre in 2007. He lives in England.

“The final novel in his masterly series featuring Inspector Charlie Resnick. We’d hate to lose this Nottingham policeman whose love of jazz distinguishes him as the mellowest of detectives. The elegiac tone struck in this melancholy story makes it clear that Harvey has no intention of giving Resnick a reprieve.”
- Marilyn Stasio, The New York Times Book Review

“Harvey’s books have hogged the critics’ superlatives, even being compared by Elmore Leonard, no less, with Graham Greene, no less. [His] great gifts for sharp but compassionate characterisation, and flashback chapters set during the miners’ strike remind us that he is often at his best when he is angriest. [H]is books are ultimately cathartic.”
- The Telegraph (UK)

“Harvey’s books are a joy because he excels in every aspect of crime fiction, including adroit plotting, sharp dialogue, subtle characterizations, and an underlying, shimmering intelligence.”
- Patrick Anderson, The Washington Post

“There is no end to Charlie Resnick. He lives in the imaginations of all those lucky readers who have picked up a book and travelled with him like an old friend. Darkness, Darkness is yet another superb telling of the character by John Harvey. As distinctly as I remember reading the first Resnick I will always remember this one. Rich in wistful telling, the story holds your heart steady in a tight fist. It doesn't let you go. It doesn't let you let go of the man either.”
- Michael Connelly

“The Resnick novels remain one of the high points in the history of crime fiction.”
- Booklist (starred review)

“Resnick has had a much-honored career in fiction. It’s nice to see him going out with his appeal and talents intact.”
- Kirkus, "10 of the Most Memorable Crime Novels of 2014"

“Every reader of contemporary mystery fiction should be acquainted with this outstanding series and its jazz-loving protagonist whose stories limn the changing world around him. Increasingly, Charlie is an observer more than an actor, but he remains an unforgettable creation.”
- Library Journal (starred review)

“John Harvey writes the way we all wish we could write. His stories are filled with the blood of true character.”
- Michael Connelly

Book Description Pegasus Books, 2014. Hardcover. Condition: New. Excellent condition. Interior is tight, bright and clean; no underlining, notes or highlighting. Hard covers are tight and stiff. Complete with original and sticker free paper dust cover. 100% Satisfaction Guaranteed. All items are carefully enclosed with bubble wrap. We ship promptly and worldwide via US Post and will email you a tracking number. Seller Inventory # SKU0059502