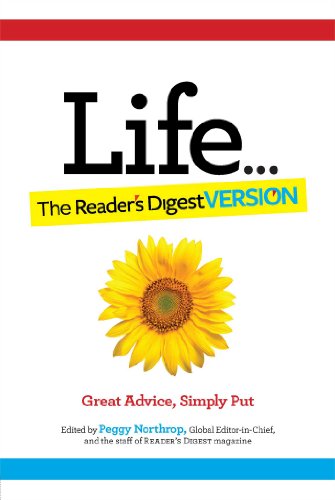 Life... is what you make it

Getting the most out of life can be so much easier if you know the coordinates. Whether you want to take the scenic route, make a quick detour, or find the simplest shortcut, there can be no substitute for a good roadmap. Part instruction manual, part GPS, part beloved confidante, Life...The Reader's Digest Version brims with smart ideas to help you navigate those tricky roads you travel each day. Covering key topics, this handy little guide includes advice that spans from surprising tips for dealing with a crisis to surefire suggestions for remembering names. Inside, you'll discover how to:

...and there's more. Each of the short-but-sweet topics delivers a shot of instant advice, distilled as only Reader's Digest can-a little life lesson that really works.

Prior to joining RDA, Northrop was Editor-in-Chief of More magazine. Under her tenure, the magazine grew to over 1 million circulation and added revenue-generating reader events, including "Escape with More" and the "Reinvention Convention." More was named AdAge's 2006 Magazine of the Year and was recognized with an ASME General Excellence nomination.

Northrop began her career in newspapers, and went on to serve in senior editorial positions at Health, Vogue, Glamour, Redbook (Executive Editor), Real Simple (Deputy Editor), and Organic Style (Editor-in-Chief). For much of her career, she specialized in health reporting for women; her work was recognized with numerous industry awards.

Northrop has been a regular contributor to The Today Show, The CBS Early Show and PBS's To The Contrary and was executive producer of More magazine's Gracie award-winning radio show, MoreTime. She is Vice President of the Board of Directors of the American Society of Magazine Editors and serves as a board member of her family's business, The Observer Publishing Company, in Washington, PA. Active with the international humanitarian organization CARE, she earned a B.A. degree from the University of California, Berkeley, and now lives in Brooklyn, NY, with her husband and daughter.