Items related to What Dreams May Come by Gertrude Atherton, Fiction,... 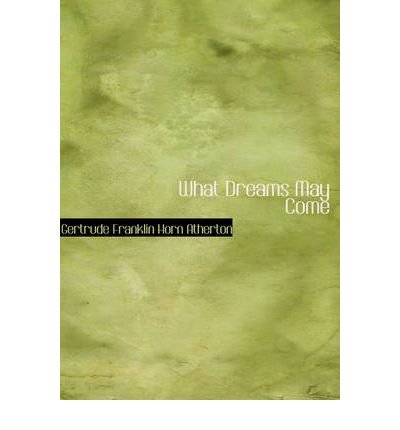 "My grandmother," she says, unveiling the old painting and fixing Harold with her unsettling gaze. "Daughter of the proudest earl in Wales -- and I am exactly like her, am I not? It is the most remarkable resemblance ever to occur in the family." "Yes," he says, then turns suddenly to the beautiful woman. "I swear I've seen her before. That's why your face was so familiar. I must have seen your grandmother when I was very young!" "But Harold," she says, elevating her brows. "That is impossible. She died when papa was a little boy!"

Gertrude Franklin Horn Atherton (1857 - 1948) was a prominent and prolific American author. Many of her novels are set in her home state of California. Her bestseller Black Oxen (1923) was made into a silent movie of the same name. In addition to novels, she wrote short stories, essays and articles for magazines and newspapers on such issues as feminism, politics and war. She was strong-willed, independent-minded and sometimes controversial.

3. What Dreams May Come