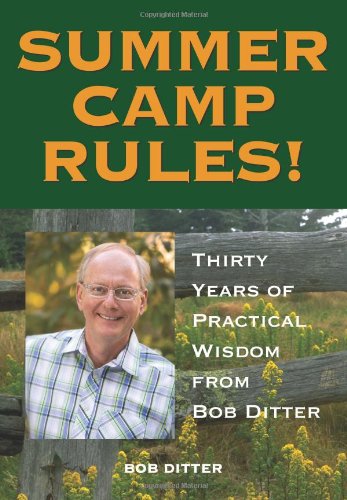 Summer Camp Rules! Thirty Years of Practical Wisdom from Bob Ditter is an invaluable resource for camp leaders at all levels. Featuring over 60 key points on communication and group skills, this book is the ultimate tool for any camp leader looking to better relate to their campers and maximize the camp experience for all campers.

Bob Ditter is a senior-level clinical social worker who specializes in the evaluation and treatment of children, adolescents, and families. He maintains a clinical psychotherapy practice in Boston, Massachusetts, and consults nationally with agencies that work with young people, including the Salvation Army, the Girls Scouts of America, the YMCA, the American Camp Association, Jewish community centers, Sea World, the Disney Channel, private and public schools, and others. He has appeared on NBC's Today Show, the ABC Evening News with Peter Jennings, and Good Morning America. He has been quoted in the New York Times, Parent magazine, Ladies Home Journal, Money magazine, and USA Today. Sports Illustrated called him "camping's most articulate spokesman" because of his work with children's summer camps since 1982. He has authored several books and has been featured on numerous well-received DVDs for camp professionals. He is best known in camp circles as the author of the popular column, In the Trenches, which appears regularly in Camping Magazine.