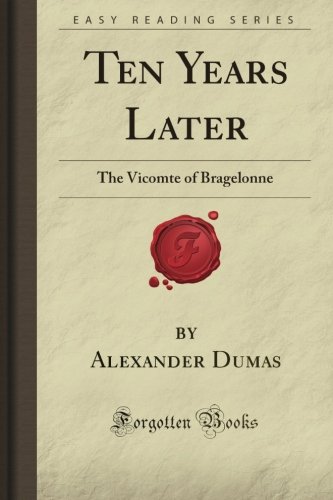 The Vicomte of Bragelonne: Ten Years Later (Le Vicomte de Bragelonne ou Dix ans plus tard) is a novel by Alexandre Dumas, pere. It is the third and last of the d'Artagnan Romances following The Three Musketeers and Twenty Years After. It appeared first in serial form between 1847 and 1850. In the English translations the 268 chapters of this large volume are usually subdivided into three, but sometimes four or even five individual books. In three-volume English editions, the three volumes are titled "The Vicomte de Bragelonne", "Louise de la Valliere", and "The Man in the Iron Mask." Each of these volumes is roughly the length of the original The Three Musketeers. In four-volume editions, the names of the volumes are kept, except that "Louise de la Valliere" and "The Man in the Iron Mask" are pushed down from second and third to third and fourth, with "Ten Years Later" becoming the second volume. There are usually no volume-specific names in five-volume editions. (Quote from wikipedia.org)

Alexander Dumas (1802 - 1870)
Alexandre Dumas, pere (French for "father", akin to Senior in English), born Dumas Davy de la Pailleterie (July 24, 1802-December 5, 1870) was a French writer, best known for his numerous historical novels of high adventure which have made him one of the most widely read French authors in the world. Many of his novels, including The Count of Monte Cristo, The Three Musketeers, and The Vicomte de Bragelonne were serialized, and he also wrote plays and magazine articles and was a prolific correspondent.

Alexandre Dumas' paternal grandparents were Marquis Alexandre-Antoine Davy de la Pailleterie, a French nobleman and General commissaire in the Artillery in the colony of Saint Domingue (now Haiti), and Marie-Cesette Dumas, an Afro-Caribb

David Coward is Reader in French at Leeds University. He has edited all our Dumas titles and is translator of Maupassant: A Day in the Country and Mademoiselle Fifi. He wrote the introduction to Laclos: Les Liasons dangereuses.

Book Description Paperback. Condition: Very Good. The book has been read, but is in excellent condition. Pages are intact and not marred by notes or highlighting. The spine remains undamaged. Seller Inventory # GOR005389628