Items related to Life as We Knew It

Pfeffer, Susan Beth Life as We Knew It 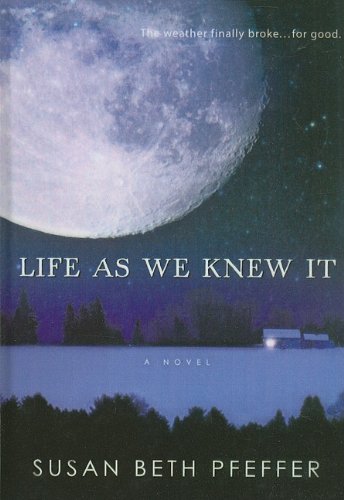 Miranda's disbelief turns to fear in a split second when an asteroid knocks the moon closer to the earth. How should her family prepare for the future when worldwide tsunamis wipe out the coasts, earthquakes rock the continents, and volcanic ash blocks out the sun? As summer turns to Arctic winter, Miranda, her two brothers, and their mother retreat to the unexpected safe haven of their sunroom, where they subsist on stockpiled food and limited water in the warmth of a wood-burning stove. In her journal, Miranda records the events of each desperate day, while she and her family struggle to hold on to their most priceless resource--hope." ""Includes a teaser to the companion novel," The Dead and the Gone.

Review:
It's almost the end of Miranda's sophomore year in high school, and her journal reflects the busy life of a typical teenager: conversations with friends, fights with mom, and fervent hopes for a driver's license. When Miranda first begins hearing the reports of a meteor on a collision course with the moon, it hardly seems worth a mention in her diary. But after the meteor hits, pushing the moon off its axis and causing worldwide earthquakes, tsunamis, and volcanoes, all the things Miranda used to take for granted begin to disappear. Food and gas shortages, along with extreme weather changes, come to her small Pennsylvania town; and Miranda's voice is by turns petulant, angry, and finally resigned, as her family is forced to make tough choices while they consider their increasingly limited options. Yet even as suspicious neighbors stockpile food in anticipation of a looming winter without heat or electricity, Miranda knows that that her future is still hers to decide even if life as she knew it is over.

Veteran author Susan Beth Pfeffer, who penned the young adult classic The Year Without Michael over twenty years ago, makes a stunning comeback with this haunting book that documents one adolescent's journey from self-absorbed child to selfless young woman. Teen readers won't soon forget this intimate story of survival and its subtle message about the treasuring the things that matter most—-family, friendship, and hope.--Jennifer Hubert

Susan Beth Pfeffer is the author of many books for teens, including the New York Times best-selling novel Life As We Knew It, which was nominated for several state awards, and its companion books, The Dead and the Gone, This World We Live In, and The Shade of the Moon. She lives in Middletown, New York.