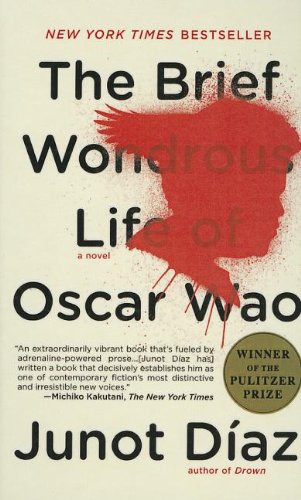 The most talked about?and praised?first novel of 2007, and winner of the Pulitzer Prize.
Oscar is a sweet but disastrously overweight ghetto nerd who?from the New Jersey home he shares with his old world mother and rebellious sister? dreams of becoming the Dominican J.R.R. Tolkien and, most of all, finding love. But Oscar may never get what he wants. Blame the fuk a curse that has haunted Oscar's family for generations, following them on their epic journey from Santo Domingo to the USA. Encapsulating Dominican-American history, "The Brief Wondrous Life of Oscar Wao opens our eyes to an astonishing vision of the contemporary American experience and explores the endless human capacity to persevere?and risk it all?in the name of love.

Amazon Best of the Month, September 2007: It's been 11 years since Junot Díaz's critically acclaimed story collection, Drown, landed on bookshelves and from page one of his debut novel, The Brief Wondrous Life of Oscar Wao, any worries of a sophomore jinx disappear. The titular Oscar is a 300-pound-plus "lovesick ghetto nerd" with zero game (except for Dungeons & Dragons) who cranks out pages of fantasy fiction with the hopes of becoming a Dominican J.R.R. Tolkien. The book is also the story of a multi-generational family curse that courses through the book, leaving troubles and tragedy in its wake. This was the most dynamic, entertaining, and achingly heartfelt novel I've read in a long time. My head is still buzzing with the memory of dozens of killer passages that I dog-eared throughout the book. The rope-a-dope narrative is funny, hip, tragic, soulful, and bursting with desire. Make some room for Oscar Wao on your bookshelf--you won't be disappointed. --Brad Thomas Parsons

Junot Díaz’s fiction has appeared in The New Yorker, The Paris Review, and The Best American Short Stories. His highly-anticipated first novel, The Brief Wondrous Life of Oscar Wao, was greeted with rapturous reviews, including Michiko Kakutani in The New York Times calling it “a book that decisively establishes him as one of contemporary fiction's most distinctive and irresistible new voices.” His debut story collection, Drown, published eleven years prior to Oscar Wao, was also met with unprecedented acclaim; it became a national bestseller, won numerous awards, and has since grown into a landmark of contemporary literature. Born in the Dominican Republic and raised in New Jersey, Díaz lives in New York City and is a professor of creative writing at MIT.

Book Description Perfection Learning, 2008. Condition: Good. Shows some signs of wear, and may have some markings on the inside. Seller Inventory # 19295995-75