Items related to Crisis and Command: A History of Executive Power from...

Crisis and Command: A History of Executive Power from George Washington to George W. Bush 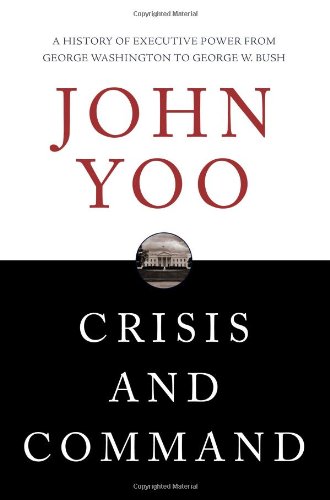 An American President faces war and finds himself hamstrung by a Congress that will not act. To protect national security, he invokes his powers as Commander-in-Chief and orders actions that seem to violate laws enacted by Congress. He is excoriated for usurping dictatorial powers, placing himself above the law, and threatening to “breakdown constitutional safeguards.”

One could be forgiven for thinking that the above describes former President George W. Bush. Yet these particular attacks on presidential power were leveled against Franklin D. Roosevelt. They could just as well describe similar attacks leveled against George Washington, Thomas Jefferson, Andrew Jackson, Abraham Lincoln and a number of other presidents challenged with leading the nation through times of national crisis.

However bitter, complex, and urgent today’s controversies over executive power may be, John Yoo reminds us they are nothing new. In Crisis and Command, he explores a factor too little consulted in current debates: the past. Through shrewd and lucid analysis, he shows how the bold decisions made by Washington, Jefferson, Jackson, Lincoln, and FDR changed more than just history; they also transformed the role of the American president. The link between the vigorous exercise of executive power and presidential greatness, Yoo argues, is both significant and misunderstood. He makes the case that the founding fathers deliberately left the Constitution vague on the limits of presidential authority, drawing on history to demonstrate the benefi ts to the nation of a strong executive office.

John Yoo is a professor of law at the University of California at Berkeley School of Law, where he has taught since 1993. From 2001-2003, he served as a deputy assistant attorney general in the Office of Legal Counsel of the U.S. Department of Justice, where he worked on issues involving foreign affairs, national security, and the separation of powers. He served as general counsel of the U.S. Senate Judiciary Committee from 1995-96, where he advised on constitutional issues and judicial nominations.

Professor Yoo has published many articles on foreign affairs, national security, and constitutional law. He is the author of The Powers of War and Peace: Foreign Affairs and the Constitution after 9/11 (University of Chicago Press, 2005) and War by Other Means: An Insider's Account of the War on Terror (Atlantic Monthly Press, 2006). Crisis and Command completes his trilogy on the controversies provoked by the September 11th attacks of 2001.

In this contentious study, Berkeley law prof and former Justice Department official Yoo reprises the brief for expansive presidential power that made him one of the Bush administration's most controversial aides. He focuses on a handful of presidents—Washington, Jefferson, Jackson, Lincoln, and FDR—who, he argues, extended executive authority in novel ways to surmount crises without letting an inherently slow, disorganized, corrupt, and pusillanimous Congress get in the way. In his account, these great presidents started wars without congressional authorization, suspended habeas corpus, detained security risks, secretly wiretapped, remade the economy, and unilaterally interpreted the Constitution. All of this, he insists, comports with the Constitution's grant of broad, ambiguous powers to a unitary executive and, usually, with congressional consensus and public well-being. His analysis culminates in a defense of Bush administration policies on warrantless wiretapping, coercive interrogation, enemy combatants, and Iraq, and a denunciation of Obama's deviations from them. Yoo's chronicle cogently fits in Bush's initiatives with previous presidential arrogations of power. But his tacit premise that the open-ended, ill-defined war on terror compares to previous crises like the Civil War and requires similarly drastic responses will be strongly disputed by civil libertarians. (Jan.)
Copyright © Reed Business Information, a division of Reed Elsevier Inc. All rights reserved.

1. Crisis and Command: A History of Executive Power from George Washington to George W. Bush

2. Crisis and Command: A History of Executive Power from George Washington to George W. Bush

3. Crisis and Command: A History of Executive Power from George Washington to George W. Bush