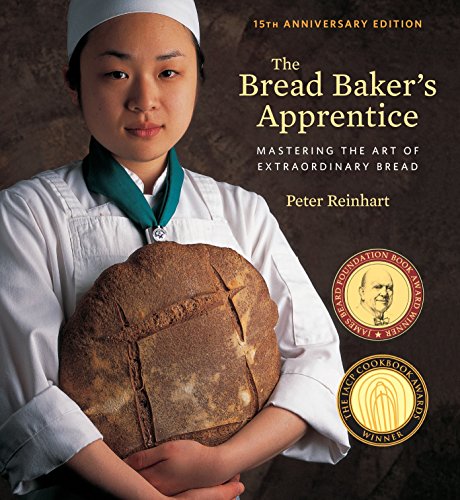 Learn the art of bread making through techniques and recipes for making pizza dough, challah, bagels, sourdough, and more!

Co-founder of the legendary Brother Juniper’s Bakery, author of ten landmark bread books, and distinguished instructor at the world’s largest culinary academy, Peter Reinhart has been a leader in America’s artisanal bread movement for more than thirty years. Never one to be content with yesterday’s baking triumph, however, Peter continues to refine his recipes and techniques in his never-ending quest for extraordinary bread.

In this new edition of the award-winning and best-selling The Bread Baker’s Apprentice, Peter shares bread breakthroughs arising from his study in France’s famed boulangeries and the always-enlightening time spent in the culinary college kitchen with his students. Peer over Peter’s shoulder as he learns from Paris’s most esteemed bakers, like Lionel Poilâne and Phillippe Gosselin, whose pain à l’ancienne has revolutionized the art of baguette making. Then stand alongside his students in the kitchen as Peter teaches the classic twelve stages of building bread, his clear instructions accompanied by more than 100 step-by-step photographs.

You’ll put newfound knowledge into practice with fifty master formulas for such classic breads as rustic ciabatta, hearty pain de campagne, old-school New York bagels, and the book’s Holy Grail—Peter’s version of the famed pain à l’ancienne,  as well as three all-new formulas. En route, Peter distills hard science, advanced techniques, and food history into a remarkably accessible and engaging resource that is as rich and multitextured as the loaves you’ll turn out. In this revised edition, he adds metrics and temperature conversion charts, incorporates comprehensive baker’s percentages into the recipes, and updates methods throughout. This is original food writing at its most captivating, teaching at its most inspired and inspiring—and the rewards are some of the best breads under the sun.

PETER REINHART is widely acknowledged as one of the world's leading authorities on bread. He is the author of six books on bread baking, including the 2008 James Beard Award-winning Whole Grain Breads; the 2002 James Beard and IACP Cookbook of the Year, The Bread Baker's Apprentice; and the 1999 James Beard Award-winning Crust and Crumb. He is a full-time baking instructor at Johnson and Wales University and the owner of Pie Town restaurant in Charlotte, North Carolina, and is the host of the popular video website, PizzaQuest.com.

I used to be a professional baker, happily making bread in beautiful Sonoma County, California. Somehow, through a series of events complexly intertwined with many other facets of my life, I found myself serving as a teacher of bread baking at the world’s largest culinary school, Johnson & Wales University, in Providence, Rhode Island. Rhode Island itself isn’t much bigger than Providence, the entire state seeming like a large metropolitan area consisting of the city and its suburbs, the whole of which is smaller than Sonoma County. Rhode Island is quite beautiful in its own way, but it is not the charm and beauty that brought me to either Sonoma County or Providence. I chronicled this journey in a previous book, so I won’t rehash its intricacies, but I will sum up one of the themes: Having learned so much from many teachers during my own life’s apprenticeships, I find a great deal of meaning and purpose in transmitting knowledge, whether it be about bread or any other aspect of life. Producing successful students gives me even more pleasure than producing successful bread.

Since my first book, Brother Juniper’s Bread Book: Slow Rise as Method and Metaphor, was published more than twenty-five years ago, dozens of superb bread books have appeared. These include recipe collections with hundreds of variations on every type of bread imaginable, from every culture, with infinite shapes and blends of grains. The Baker’s Catalogue, produced by the good people at King Arthur Flour (see Resources, page 314), has grown from a sort of underground journal to a popularly discussed source of supplies and folklore among the thousands of “bread-heads” sprouting like malted barley across the country. Bread machines have become common household gadgets, and many of them are actually being used and are not just sitting on the counter like last year’s toy. The recipe books for bread machines are among the best sources for esoteric single-loaf recipes, some of them of the family-heirloom variety. Whenever I want quick information on the “backstory” of a particular type of bread, usually in response to a question from one of my students, one of the first places I check is my collection of bread-machine recipe books. “World encyclopedia” books on bread, “ultimate” books on bread, books on artisan breads and the bakers who make them, and numerous websites and e-groups dedicated solely to the growing national passion for bread baking have also become part of the bread landscape.

I wanted to call one of my recent books The Bread Revolution, but that sounded too militant (“After all, what are they revolting against?” one editor asked me). We tried Bread Renaissance, but I thought that sounded too elitist, and the most famous person who made a snobbish remark about bread, Marie Antoinette, lost her head over it (“Let them eat brioche,” she was reported to have shouted when asked for her final words). After serious brainstorming, we came up with Crust & Crumb: Master Formulas for Serious Bread Bakers, and I’m glad we did. I loved the sound of that title and so did many readers who commented on its aptness. It allowed me to pursue what I think of as my personal teaching mission: synthesizing information and reformulating it into usable knowledge for current times. The “master formula” concept helped home bakers, and even some professional ones, take a step away from recipe dependence toward thinking like a baker. This means thinking formulaically and structurally and then baking by an elusive quality called feel, not just blindly following a recipe without knowing the reasons behind certain steps. (Interestingly, many years later, in 2014, I did publish a book called Bread Revolution with the same publisher, which reminded me never to give up on a good title.)

Knowledge is power, and I think a teacher’s job is all about the empowerment of his or her students, regardless of the subject. A bread baker, like any true artisan, must have the power to control outcomes. This concept of empowerment is a universal principle and one of the reasons I love teaching. It’s what made ancient craft guilds so important and powerful. Whether the aspiring artisan was a baker, carpenter, mason, butcher, candlestick maker, or chef, a guild apprenticeship put initiates on common ground with others, establishing a shared understanding of what made life meaningful. Coupled with religious influences, and the basic three R’s, guild training was a foundation peg in keeping the spirit of quality, beauty, and goodness alive in the world. With this book, I want to forge into the next frontier with you, beyond simply making bread, and on to explore its possibilities from the inside out to empower you to control the outcomes of your bread-baking pursuits. My goal is to teach you to fly without controls, by feel, the way a good pilot must from time to time.

Book Description Hardcover. Condition: new. Hardcover. Never one to be content with yesterday's baking triumph, Peter Reinhart continues to refine his recipes and techniques in his never-ending quest for extraordinary bread. In this revised edition of his beloved and bestselling classic, he further perfects his recipes by adding metrics and conversion charts, incorporating baker's percentages into the recipes, and updating methods throughout. He shares his latest bread breakthroughs for classics like ciabatta, kaiser rolls, English muffins, and Swedish rye, and adds three all-new bonus recipes for onion and poppy seed bialys, sprouted wheat and brown rice bread, and ultimate cinnamon rolls made from bialy dough. With an updated resource section, this will surely continue to be the go-to bread baking book for amateur and professional bakers across the country. Shipping may be from multiple locations in the US or from the UK, depending on stock availability. Seller Inventory # 9781607748656