Items related to Men Explain Things to Me

Men Explain Things to Me 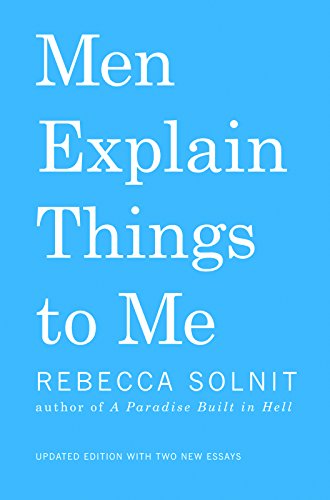 Rebecca Solnit: Rebecca Solnit is the author of 13 books, including A Paradise Built in Hell: The Extraordinary Communities That Arise in Disasters and Infinite City: A San Francisco Atlas. She is, from kindergarten to graduate school, a product of the California public education system now being decimated.

"The Antidote to Mansplaining."
The Stranger

"Solnit tackles big themes of gender and power in these accessible essays. Honest and full of wit, this is an integral read that furthers the conversation on feminism and contemporary society."
San Francisco Chronicle Top Shelf

"Solnit [is] the perfect writer to tackle the subject: Her prose style is so clear and cool."
The New Republic

"The terrain has always felt familiar, but Men Explain Things To Me is a tool that we all need in order to find something that was almost lost."
National Post

"Where opponents would argue that feminism is humorless and superfluous, Men Explain Things to Me is a compelling argument for the movement's necessary presence in contemporary society. It approaches the subject with candor and openness, furthering the conversation and opening a new Pandora's box that's apt to change the way we talk about women's rights."
Shelf Awareness

"Solnit’s intimate understanding of how the twin bulwarks of language and silence fuel political agendas is only part of what makes her writing so exciting. The other essays in the collection complement the first (some are even stronger), but theirs is the poetic correlation of masterful storytelling. Ultimately Solnit’s interdisciplinary, patchwork narratives are drawn together by a single theme: hope."
The Baffler

"An engaging primer on the realities of mansplaining."
Bitch Magazine

"Solnit’s pull-no-punches observations... make this a valuable contribution to feminist theory."
The Indypendent

"A necessary read in these fraught times. Starting with the title essay, which went viral and inspired the ever-useful term mansplaining,” Solnit writes powerfully about the ways in which power is wielded in today’s society, and brings awareness to the staggering inequalities that we wrestle with on a daily basis."
FlavorWire

"A brilliant, varied, and thoroughly enjoyable read and definitely an addition to my list of feminist faves."
Lip Magazine

"Sharp narratives that illuminate and challenge the status quo of women's roles in the world. Slim in scope, but yet another good book by Solnit."
Kirkus Reviews

1. Men Explain Things to Me

2. Men Explain Things to Me

3. Men Explain Things to Me

4. Men Explain Things to Me