Items related to The Hypernaturals Vol. 2 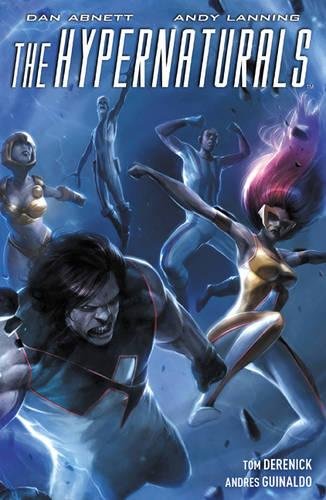 The team that revitalized Guardians of the Galaxy does cosmic superheroes THEIR way!

It is the far future; the human race has finally colonized the galaxy, preserving an era of prosperity that's only possible because of The Hypernaturals. Until the celebrated, galaxy-wide superhero task force mysteriously vanishes. Now, with the teams’ greatest enemy on the loose again; it's up to a group of retired and long forgotten Hypernaturals -- and their novice recruits -- to save the galaxy from complete destruction. However, a threat even greater than their enemy may lurk around the corner... Dan Abnett and Andy Lanning, the superstar writing duo behind Guardians of the Galaxy and The Legion, launch an all-new original graphic novel series that takes cosmic super-heroes to a new frontier.

Dan Abnett is a multiple New York Times bestselling author and an award-winning comic book writer. He has written over forty novels, including the acclaimed Gaunt’s Ghosts series and the Eisenhorn and Ravenor trilogies. His Horus Heresy novel Prospero Burns topped the SF charts in the UK and the US. In addition to writing for Black Library, Dan scripts audio dramas, movies, games, comics and bestselling novels for major publishers in Britain and America. He lives and works in Maidstone, Kent.