Items related to Afghanistan: On the Bounce

Afghanistan: On the Bounce

Afghanistan: On the Bounce 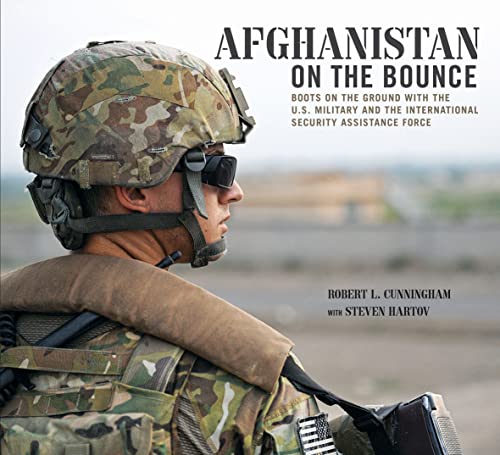 What was it like to serve in Afghanistan? That is the question civilians often ask returning servicemembers of the armed forces. Afghanistan: On the Bounce brilliantly conveys the full range of the troops’ experiences on patrol, in combat, in the chow line, and in religious services through photographs, stories, diagrams, and removable ephemera.

As a documentation/production specialist in Afghanistan, photographer Robert L. Cunningham accompanied soldiers of 40 different units on 132 combat missions, following them during their typical on-base routines as well as into hazardous situations. Here are detailed examinations of the servicemembers’ weapons, uniforms, vehicles, and gear, along with reflections on duty, insights into valor and heroism, and clear-eyed humor about life on deployment.

Robert L. Cunningham is an author, photographer, and defense industry consultant with work pertaining primarily to military and intelligence operations, warfare, and law enforcement. Having operated in 24 countries around the world, he is a contributor to Fox News, National Geographic, Army Magazine, The Daily Mail, and The Telegraph. His photographic work has been featured in international art galleries, shows, and museums, including the George W. Bush Presidential Library and Museum. He currently resides in Phoenix, Arizona.

Steven Hartov is the former editor-in-chief of Special Operations Report and co-author of the New York Times best sellers In the Company of Heroes and The Night Stalkers. His trilogy of espionage novels, The Heat of Ramadan, The Nylon Hand of God, and The Devil's Shepherd, earned nominations for the National Book Award, top ten placements in the Book of the Month Club, and translations into 6 foreign languages. His works are recommended readings by the U.S. Army War College. He currently lives in New Jersey.

The US military presence in nomadic Afghanistan represents the world’s most advanced weaponry and technology, placed in the hands of highly trained volunteer soldiers from every corner of hyperindustrialized America it’s an absurdly asymmetrical, discomforting experience for both Afghans and Americans. This searing collection of photos was culled from the 55,000 that Robert Cunningham shot during the 132 missions he took part in. Beyond the high tension of combat, it’s the day-to-day trivialities of troop life chow lines, religious services, kicking around a soccer ball that lift this book to rare heights.”
Foreword

"It’s a book that will enthrall readers from the first page to the last image and cause them to start all over again."
A Soldier's Perspective

"An extraordinary book on our fighting forces in Afghanistan..."
Canada Free Press

1. Afghanistan: On the Bounce

2. Afghanistan: On the Bounce

3. Afghanistan: On the Bounce