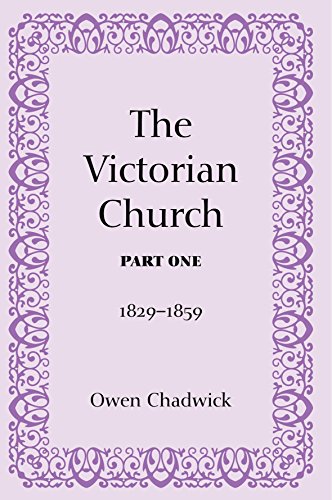 Concerned here broadly with the period 1829-59, Professor Chadwick writes of the church's precarious position at the start of the period, and the problems of dissent; the Whig reform of the Church by the ministries of Peel and Melbourne; the Oxford Movement, the influence of Newman and the development of ritual; the relations of church and government under Lord John Russell; the growth of the seven principal dissenting bodies; the theory and practice of Church and State at mid-century, and the troubles that arose over eucharistic worship; and finally the unsettlement of faith and the several attempts at restatement at the close of the period. The history is completed in The Victorian Church, Part II 1860-1901.

Owen Chadwick was Regius Professor of Modern History at Cambridge from 1968 to 1983. He has written many books, including "The Reformation", "The Victorian Church", "The Popes and European Revolution", as a result of which he was awarded the Wolfson Prize for history, and "Michael Ramsey".

3. The Victorian Church, Part One