Items related to WHITE SEED: The Untold Story of the Lost Colony of...

Clayton, Paul WHITE SEED: The Untold Story of the Lost Colony of Roanoke

WHITE SEED: The Untold Story of the Lost Colony of Roanoke 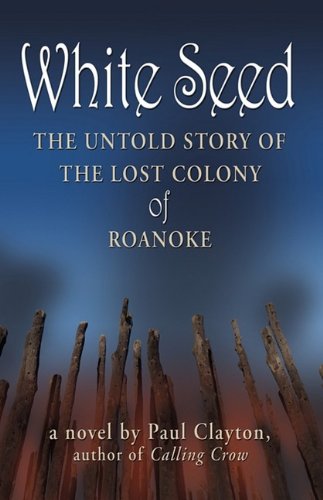 A fully-realized historical thriller in the tradition of James Clavell's Shogun and Ken Follett's The Pillars of the Earth.  (492 pages in print)

One of the most haunting mysteries in American history -- The Lost Colony of Roanoke -- comes roaring back to life in White Seed, with a compelling cast of characters, among them:

Manteo, Croatoan interpreter for the English, inhabitant of two worlds, belonging to neither,

Captain Stafford, brave and disciplined, but cruel soldier, and

Powhatan, shrewd Tidewater warlord who wages a stealthy war against the colonists.
Chapter 1

Maggie knew that this old man would do to her what the other had - if he could get her alone. She stood on the  deck of Sir Walter Raleigh's ship, the Lion, the afternoon sun burning through her simple gown of green linen, as she waited for her turn to be interviewed for a place in Raleigh's New World Virginia Paradise. She had not eaten all day and the stench of garbage and pitch pine
from the harbor threatened to make her retch. The old man, a sailor with a gray goat's beard sprouting from his chin, sat at a table ten feet away, writing in a black leather-bound ledger open before him.

Maggie Hagger, seventeen years of age, had long, red hair and a fair, pretty face flecked with freckles. The ship, although tightly tethered to the quay, moved slightly on a swell. Maggie took her eyes off the man to look up at the looping white of the furled sails as they moved slightly across the blue vault of the sky. Like a graceful swan, this ship would take her far away to safety upon its
downy back -- if she got a contract of indenture! And get one she must... or hang!

"Next!" the old sailor said finally.

As Maggie approached, she looked to her left at twenty-five or so common people dressed in plain brown woolens and homespun, whose terms of indenture had already been purchased. They waited in the stark sunlight with their belongings in shabby bundles about their feet. On the other side in the shade cast by stacks of wooden pens containing sheep and hens, about a dozen of the better sort, dressed in fine clothes and wearing hats of bright colors, talked softly.
They were all watching Maggie expectantly.

He had an ugly voice like the bark of a dog, recalling to Maggie the bray of the man who had pursued her and Thomas halfway across England. She remembered their escape from the London warehouse in the blackness of night. They had crept along the slippery stones of the exposed banks of the Thames as a horrid, faceless man shouted
after them, "Redheaded whore! Wherever you go I will find you. Hear me! I will find you and you shall hang!"

Paul Clayton is the author of a three-book historical series on the Spanish Conquest of the Floridas-- Calling Crow, Flight of the Crow, and Calling Crow Nation (Putnam/Berkley), and a novel, Carl Melcher Goes to Vietnam (St. Martin's Press), based on his own experiences in that war. Carl Melcher Goes to Vietnam was a finalist at the 2001 Frankfurt eBook Awards, along with works by Joyce Carol Oates (Faithless) and David McCullough (John Adams). Clayton's latest book-- White Seed: The Untold Story of the Lost Colony of Roanoke-- is a work of historical fiction. Paul currently lives in California, with his son and daughter.

White Seed... hews closely to... Raleigh's second doomed attempt to plant the British flag in Virginia... Readers will find this saga, which... achieves page-turner velocity, to be a dandy diversion and an entertaining education.
--Publishers Weekly

1. WHITE SEED: The Untold Story of the Lost Colony of Roanoke

Book Description Condition: New. Our Ranking is Your Confidence! This is a brand new book! Fast Shipping - Safe and Secure Mailer - Our goal is to deliver a better item than what you are hoping for! If not we will make it right!. Seller Inventory # 1XGA4U000SAV

2. WHITE SEED: The Untold Story of the Lost Colony of Roanoke

3. WHITE SEED: The Untold Story of the Lost Colony of Roanoke

Book Description Paperback. Condition: New. Our Ranking is Your Confidence! This is a brand new book! Fast Shipping - Safe and Secure Mailer - Our goal is to deliver a better item than what you are hoping for! If not we will make it right!. Seller Inventory # 1XGA4U000SAV_ns

4. WHITE SEED: The Untold Story of the Lost Colony of Roanoke