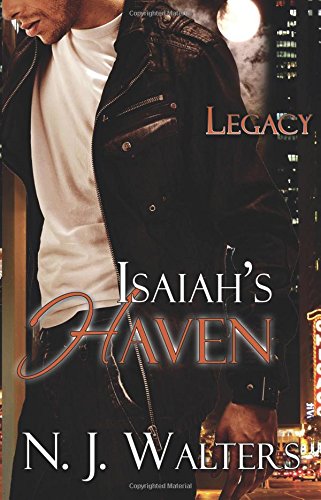 Legacy, Book 2 Isaiah Striker puts family first, the pack a distant second. Which is precisely the reason he’s in noisy, crowded Chicago instead of alone in his beloved woods. One look at the owner of Haven nightclub, however, and a simple favor for his brother turns into something else entirely. Meredith Cross holds her small pack together with sheer determination. After years on the run, they hide in the glare of the city’s nightlife. Isaiah may heat her blood, but she can’t afford to risk the lives of the outcast half-breeds in her care. Once exposed, every bounty hunter and werewolf purist in smelling distance will hunt them down. But when their sexual attraction spirals out of control, a moment’s distraction is all it takes to lead danger right to Meredith’s door. For Meredith there’s only one choice: her pack. But Isaiah knows his mate when he sees her. And he’s not giving up without a fight. Warning: This book contains hot sex, a jazzy nightclub, sexy werewolves, rogue werewolves, nasty bounty hunters, a mysterious vampire, and did I mention hot sex?

The only thing Isaiah Striker cares about is family, which is how he finds himself in Chicago doing a favor for his brother.

After years of running, Meredith Cross and her pack now operate Haven, an eclectic nightclub. The sexy, Isaiah Striker is a threat to pack security and to her peace of mind.

Their lives become entwined as the sexual attraction between them spirals out of control. When paranormal bounty hunters and purist werewolves threaten her pack, both she and Isaiah must overcome the constraints of their pasts if they hope to survive and have a future together.

Book Description Samhain Publishing, 2011. Condition: Good. A+ Customer service! Satisfaction Guaranteed! Book is in Used-Good condition. Pages and cover are clean and intact. Used items may not include supplementary materials such as CDs or access codes. May show signs of minor shelf wear and contain limited notes and highlighting. Seller Inventory # 1609281756-2-4

Book Description Samhain Publishing 2011-07-05, 2011. Paperback. Condition: Very Good. Item is in very good condition. If supplemental codes/CDs for textbooks are required please contact us prior to purchasing as they may be missing. Seller Inventory # DS-1609281756-2

Shipping: US$ 6.84
From United Kingdom to U.S.A.
Destination, rates & speeds

Book Description Paperback. Condition: Very Good. The book has been read, but is in excellent condition. Pages are intact and not marred by notes or highlighting. The spine remains undamaged. Seller Inventory # GOR010344664