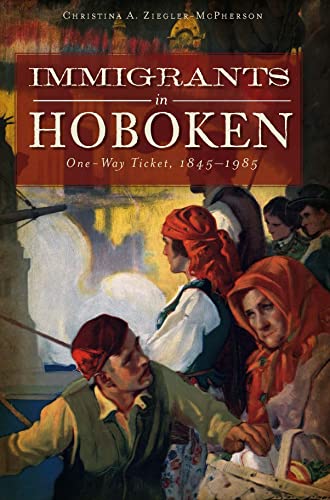 Since peoples from around the globe began to come to America, Hoboken has always been a popular destination for immigrants. People migrated from Ireland, Germany, Italy, Russia, Puerto Rico and other countries to the city, hoping to find opportunity and prosperity for themselves and their families in America. Using Hoboken as a point of entry, many ultimately chose to remain in the Mile Square City. As they struggled to establish themselves, immigrants clashed with one another and with native-born Hobokenites as they influenced the city's politics, economics, religions and customs. Author Christina A. Ziegler-McPherson explores their struggles and the complicated conflicts that have influenced the ethnic and cultural environments of this New Jersey city.

Christina A. Ziegler-McPherson is a public historian in the New York City area. She holds a PhD in history from the University of California, Santa Barbara, is the author of Americanization in the States: Immigrant Social Welfare Policy, Citizenship, and National Identity in the United States, 1908-1929 (University Press of Florida, 2009) and has published several encyclopedia essays about immigration. She has done historical research for such institutions as the Hoboken Historical Museum and the Museum of the City of New York and has taught history at Empire State College (SUNY).

"Ziegler-McPherson, who earned her Ph.D. in American history from the University of California, Santa Barbara, said she spent three years off and on writing her book, her second. She poured through census data, city directories, church directories, newspaper articles and various other sources." --Alan Skontra, Hoboken Patch

Book Description Paperback. Condition: New. Paperback. Shipping may be from multiple locations in the US or from the UK, depending on stock availability. 190 pages. 0.299. Seller Inventory # 9781609491635