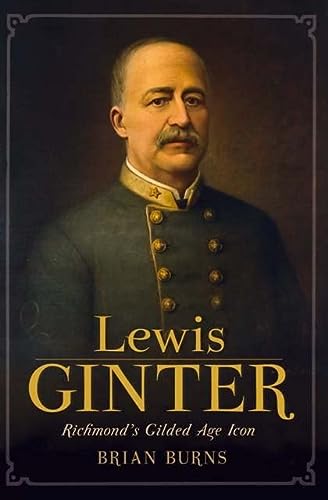 As a war hero, philanthropist and entrepreneur, Lewis Ginter was many things to Richmond. Performing integral missions for "Stonewall"? Jackson and Robert E. Lee, Ginter was commended for gallantry on the battlefield and became affectionately known as the "Fighting Commissary."? After the war, Ginter was the first major marketer of the hand-rolled cigarette in America. He developed one of America's first streetcar suburbs and built the magnificent Jefferson Hotel, a symbol of Richmond's ambition and prosperity. But beyond the well-known history of this River City icon, there are many aspects of his personal and professional life that few know about. Join local writer Brian Burns as he delves into the hidden history of Ginter's extraordinary life to fill in the gaps between Ginter the man and Ginter the legend.

Brian Burns started his career in the 1980s as an advertising art director in North Carolina. In 1987, he moved to Richmond, where he enjoys a simpler life in writing and horticulture. His home is in the Bellevue district, one of the neighborhoods that Lewis Ginter and John Pope pioneered.

"Brian Burns tells the story of the man who was the first major marketer of the hand-rolled cigarette in the United States, developed the streetcar suburb of Ginter Park (and helped bring Union Theological Seminary, now Union Presbyterian Seminary, there) and built The Jefferson Hotel. And Burns does more. By using many original sources, he writes of details of Ginter's life that even longtime Richmond-history buffs may not know." --Richmond Times-Dispatch

Book Description Paperback. Condition: New. Paperback. Shipping may be from multiple locations in the US or from the UK, depending on stock availability. 224 pages. 0.372. Seller Inventory # 9781609493806