Items related to The Sexual Life of Japan

The Sexual Life of Japan 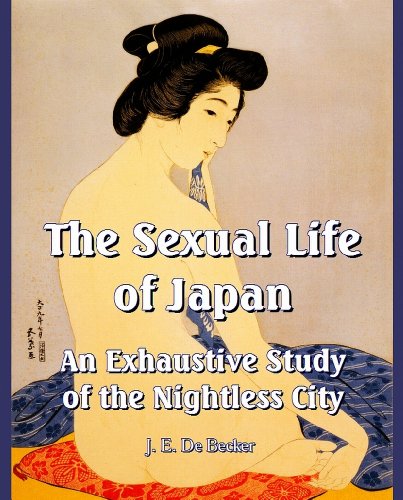 James A. Michener (in The Floating World) has called De Becker's notorious study and history of Tokyo's brothel quarter an "unorganized collection of astonishing facts." De Becker, a lawyer, was one of very few naturalized Westerners living in Yokohama; he wrote numerous works on Japanese law, economics and language during the period 1897-1928. He treats his subject seriously and in detail, providing information on modes, manners, laws, architecture and every aspect of the brothels of Yedo. He claims in his preface that "so long as the human race shall last, so long as human appetites demand illegitimate gratification, so long as human blood shall course hot in the veins, so long as men have passions, so long as women are frail, so long as illicit pleasure has attraction for bewildered wallowing humanity, and so long as lust 'the headstrong beast' stalks through the earth, venery and dissipation will undoubtedly continue to claim thousands of unhappy victims." The subtitle more accurately reflects the topic of this book. The "History of the Yoshiwara Yuwaku," refers to a segregated town (Yuwaku) provided with brothels and assignation houses first established in the 1650's in the Yoshiwara section of Edo, now Tokyo, and a center of Japanese prostitution into the early 20th century, when it became a target of social reformers and public health workers dealing with the spread of venereal disease. This very early study of the Yoshiwara before the great fire is an anthropological and behavioral study classic, outlining all classes of prostitutes, their occupations, clients and method of service to the owners. The best, most complete book on the subject, popular or scholarly-this is both.