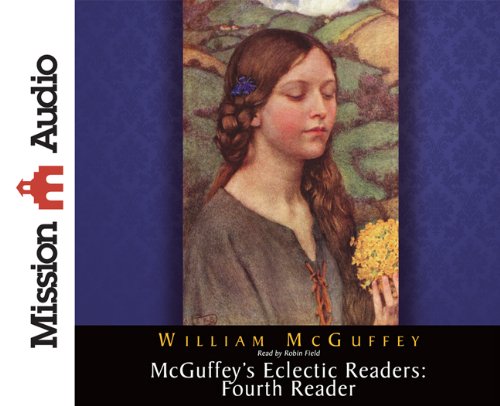 Born in 1800, William Holmes McGuffey had a remarkable ability to memorize, and could commit to mind entire books of the Bible. After becoming a teacher at the age of 14, classroom size was just one of several challenges faced by McGuffey.

In many one-teacher schools, students’ ages varied from six to twenty-one, and few textbooks existed. In 1835, a publishing firm asked McGuffey to create a series of graded Readers for primary level students. The series consisted of stories, poems, essays and speeches and it is estimated that at least 120 million copies of McGuffey's Readers were sold between 1836 and 1960, placing its sales in a category with the Bible and Webster’s Dictionary.

Since 1961 they have continued to sell at a rate of some 30,000 copies a year. No other textbook bearing a single person's name has come close to that mark. McGuffey’s 3rd Reader is appropriate for a variety of ages/reading levels, but most closely approximate 3rd to 5th grades.

William McGuffey (1800-1873), American educator, author, and Presbyterian minister is best known for creating the McGuffey Readers, the first widely used textbooks in the U.S. William McGuffey, who had a lifelong interest in teaching children, compiled the first four readers beginning in 1836, while his brother Alexander created the fifth and sixth readers in the 1840s. In 1879, the readers were revised to better portray America as a melting pot of moralities and middle-class values. The McGuffey Readers have been popular for more than 150 years, have sold more than 120 million copies since 1836, and are still in use today.

Robin Field is the AudioFile Earphones Award-winning narrator of numerous audiobooks, as well as an award-winning actor, singer, writer, and lyricist whose career has spanned six decades. He has starred on and off Broadway, headlined at Carnegie Hall, authored numerous musical reviews, and hosted or performed on a number of television and radio programs over the years.