Items related to Lion's Speedy Sauce (Jump Up and Join In!)

Grant, Carrie And David Lion's Speedy Sauce (Jump Up and Join In!)

Lion's Speedy Sauce (Jump Up and Join In!) 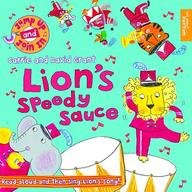 From the creators of hit CBeebies series Pop Shop comes a brand-new range of six energetic picture books, all about MAKING MUSIC! Lion's lost his rhythm and his bongos are missing a beat! Will the marching band help him get his tempo back in time for the summer fair? Sing-along with TV and pop stars Carrie and David Grant in an exciting new picture book and audio series for children who love music. Each beautifully illustrated picture book is accompanied by an audio book featuring narration, songs to join in with and lesson plans written by Carrie and David. So what are you waiting for? Kids who love books and music can just JUMP UP and JOIN IN! Devised by the world's leading vocal coaches Carrie and David Grant - who have worked with everyone from Take That to The Saturdays, on Fame Academy to Songs of Praise - these books combine music-themed stories with important lessons.

Carrie and David Grant are two of the best known pop vocal coaches in the UK. Their involvement with Fame Academy bringing them to the attention of the nation. Carrie has been a dancer and a presenter for Children's television and both have had successful careers as vocalists. At the end of 2007 Carrie and David received the prestigious Gold Badge Award presented by The British Academy of Composers and Songwriters in recognition of their outstanding contribution to British music. They present Carrie and David's Popshop!: a fantastic introduction for young children into pop music Ailie Busby has been illustrating books for children for more than fifteen years and studied at Nene College and the Cambridge school of Art. Her work is published in countries all over the world including in the UK, Italy, France, Korea and the USA and she has had over twenty books published. When not illustrating, she enjoys cooking, going to the cinema, rummaging around flea markets, walking my dog on the beach and chocolate.

1. Lion's Speedy Sauce : Jump up and Join In

Book Description Kane Miller. Paperback. Condition: Good. A copy that has been read, but remains in clean condition. All pages are intact, and the cover is intact. The spine may show signs of wear. Pages can include limited notes and highlighting, and the copy can include previous owner inscriptions. At ThriftBooks, our motto is: Read More, Spend Less. Seller Inventory # G1610671805I3N00

Book Description Kane/Miller Book Publishers, 2013. Condition: Good. Shows some signs of wear, and may have some markings on the inside. Seller Inventory # GRP102195117

Book Description Kane/Miller Book Publishers, 2013. Condition: Good. A+ Customer service! Satisfaction Guaranteed! Book is in Used-Good condition. Pages and cover are clean and intact. Used items may not include supplementary materials such as CDs or access codes. May show signs of minor shelf wear and contain limited notes and highlighting. Seller Inventory # 1610671805-2-4

Book Description Kane/Miller Book Publishers, 2013. Paperback. Condition: Good. Connecting readers with great books since 1972. Used books may not include companion materials, some shelf wear, may contain highlighting/notes, may not include cdrom or access codes. Customer service is our top priority!. Seller Inventory # S_279939475

Book Description Kane/Miller Book Publishers, 2013. Paperback. Condition: Good. Connecting readers with great books since 1972. Used books may not include companion materials, some shelf wear, may contain highlighting/notes, may not include cdrom or access codes. Customer service is our top priority!. Seller Inventory # S_281436785