Items related to The Successor 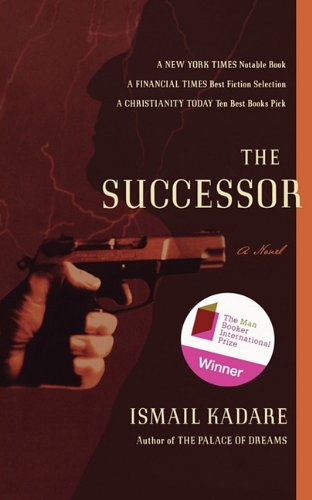 A powerful political novel based on the sudden, mysterious death of the man who had been handpicked to succeed the hated Albanian dictator Enver Hoxha. Did he commit suicide or was he murdered? That is the burning question. The man who died by his own hand, or another's, was Mehmet Shehu, the presumed heir to the ailing dictator, Enver Hoxha. So sure was the world that he was next in line, he was known as The Successor. And then, shortly before he was to assume power, he was found dead. THE SUCCESSOR is simultaneously a mystery novel, a historical novel-based on actual events and buttressed by the author's private conversations with the son of the real-life Mehmet Shehu-and a psychological novel (How do you live when nothing is sure?). Vintage Kadare, THE SUCCESSOR seamlessly blends dream and reality, legendary past, and contemporary history.

Ismail Kadare is the winner of the inaugural Man Booker International Prize, and is acclaimed worldwide as one of the most important writers of our time. Translations of his novels have been published in more than forty countries. He divides his time between Paris, France, and Tirana, Albania.

One
A Death in December
1

The Designated Successor was found dead in his bedroom at dawn on December 14. Albanian television made a brief announcement of the facts at noon: “During the night of December 13, the Successor succumbed to a nervous depression and took his own life with a firearm.”

International news agencies circulated the Albanian government’s version of the story around the world. Only later that afternoon, when Yugoslav radio voiced a suspicion that the suicide might actually have been murder, did the wire services amend their bulletins to allow for both versions of the event.

In the middle of the sky, which stretched as far as the eye could see and carried the news far and wide, stood a high clump of clouds like a celestial wrath.

Whereas the death shook the whole country, the absence of national mourning, and especially the
unaltered television and radio schedules, failed to provoke the intended shock. Once their initial puzzlement had passed, people were persuaded by the explanation that was doing the rounds: despite the country’s rejection of the cross, suicide remained implicitly just as blameworthy as it was in the Christian faith. What was more – and this was the main thing – throughout the fall and e
especially after the onset of winter, people had begun to expect the Successor to topple.

Albanians had long been unaccustomed to the tolling of bells, so they looked next day for signs of mourning wherever they might be found – on the façades of government buildings, in the musical offerings broadcast by national radio, or on the face of their neighbor stuck in the long line outside the dairy. The non­appearance of flags at half-mast and the absence of funeral marches on the airwaves eventually peeled the scales from the eyes of those who had chosen to believe that things were just a bit behind schedule.

News agencies around the world persisted in reporting the event and in giving the two alternative explanations: suicide and murder.

In fact, it looked more and more as if the Successor had intentionally chosen to depart this vale of tears in a particular way, wrapped in not one but two shrouds of mourning, as if he had decided to have himself hauled away by two black oxen, one being insufficient to his needs.

As they anxiously opened their morning papers, hoping to learn something more about the event,
people were actually trying to fathom which of the two alternatives – self-inflicted death, or death inflicted by the hand of another – would affect them less harshly.

For lack of news in the media, people fell back on what was being repeated in after-dinner gossip all over town. The night of the Successor’s death had been truly terrifying–and it was certainly not a figment of their imagination, for everyone had seen it. Lightning, downpours, and wild gusts of wind! It was no secret that after an autumn full of fears, the Successor had been going through a psychologically difficult time. The next day, in fact, he had been due to attend a decisive meeting of the Politburo where the errors he had to confess in his self-criticism would presumably have been forgiven.

But like so many people born under a cloud and who, on the very brink of salvation, slip and fall into the abyss, the Successor had been in too much of a hurry. He had penned a letter of apology for taking his leave and then ended his own life.

That night, the whole family had been at home. After supper, as he was on his way to bed, the Successor asked his wife to please wake him at eight in the morning. For her part, she who had found it impossible to sleep for weeks on end, as she would later admit, fell into a deep slumber that lasted all night. Her daughter, who had spotted light coming from under her father’s bedroom door as late as two in the morning, when it went out, turned in to bed shortly thereafter. Nobody heard any noise whatsoever.

And that was pretty much all the information that emanated, or seemed to emanate, from the house of the deceased. But other stories seeped out from the gated compound – the Bllok – where state officials lived. If the night had indeed been particularly wet and windy, an unusual number of cars had nonetheless been seen entering and leaving the Bllok. The strangest thing was that around midnight, or maybe a little later, the silhouette of a man had been seen slipping into the residence of the deceased. A prominent member of the government . . . but it was forbidden to say . . . not under any circumstances . . . so, an extremely high-ranking official . . . had gone in . . . and come out again shortly thereafter . . .

The files on Albania lay moldering under a thick coat of dust. That wasn’t by any means the first time that such lack of rigor had been observed inside various intelligence agencies. As can be imagined, the observation carried more than a hint of criticism on the part of the ranking officers and spread a sense of guilt among the subordinates, who set about reopening said files, promising never to shirk their duties again.

What was known about Albania was mostly obsolete, and some of it was distinctly romanticized. A small nation whose name meant “Land of Eagles.” An ancient people of the Balkan Peninsula, who had succeeded the Illyrians and perpetuated their tongue. A new state that had emerged from the ruins of the Ottoman Empire at the dawn of the twentieth century. A land of three faiths: Catholic, Orthodox, and Muslim, declared a monarchy under a minor German prince of the Protestant persuasion. Then a republic under the leadership of an Albanian bishop. Who was overthrown in a civil war led by the next king, this one a native. Who was overthrown in his turn by another sovereign – an Italian monarch, as it happened, who confiscated the Albanian crown and proclaimed himself “King of Italy and Albania and Emperor of Abyssinia.” And finally, after that grotesque coupling, where for the first time in their history Albanians were led to constitute a state on an equal footing with Africans, came the outbreak of Communist dictatorship. With new friendships and bizarre alliances solemnly made and haughtily repudiated.

On that part of the story, in fact, and in particular on the two major squabbles, first with the Russians then with the Chinese, most of the files bore traces of subsequent revision. Several extra sheets had been slipped in, containing analyses, reflections, facts, and forecasts, most of which ended in a question mark. The addenda were mostly attempts to work out which way Albania would turn next: toward the West, or once again to the East? The answer was rendered even more uncertain by its being dependent on other questions for which answers had never been found. Was it in the West’s interest to draw Albania into its bosom? Some position papers seemed to refer to the possibility of a secret accord between the Communist bloc and the West: We’ll drop Albania – on condition you keep your hands off it too. One of the files even quoted a brief in which the issue was stated explicitly: Should the West risk alarming the Soviet camp by seducing poor little Albania, or keep the sweet talk for a better-endowed bride, namely Czechoslovakia?
From the Hardcover edition.

Book Description Arcade Publishing, 2011. Condition: Good. A+ Customer service! Satisfaction Guaranteed! Book is in Used-Good condition. Pages and cover are clean and intact. Used items may not include supplementary materials such as CDs or access codes. May show signs of minor shelf wear and contain limited notes and highlighting. Seller Inventory # 1611452783-2-4

3. The Successor: A Novel