Items related to The Manzoni Family: A Novel

The Manzoni Family: A Novel 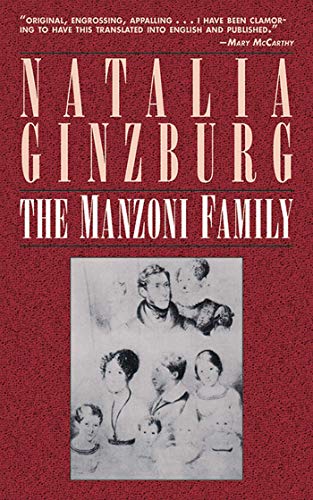 Set in ducal Italy and post-revolutionary France, The Manzoni Family tells a rich story of passions, writing, rivalries, deaths, and war. It pivots on the figure of Alessandro Manzoni, celebrated Milanese nobleman, man of letters, and author of the masterpiece of nineteenth-century Italian literature, I promessi sposi (The Betrothed). But the tale begins with the matriarchal figure of Giulia, the mother whom the young poet found in Paris after she had abandoned him as an infant.
There is Enrichetta, the woman he and his mother chose to be his wife, and the many children she had by him until her death; literary friends from the beau monde in Italy and Paris; and Alessandro's second wife, Teresa, and her children. Against the background of Napoleonic occupation, the reestablishment of Austrian hegemony, and the stirrings of the revolutionary urge for unification and independence, Ginzburg gracefully weaves the story of a dynasty, the Manzoni family, that seems to grow autonomously around the life of the writer and to incorporate all the epic tumult and emotion of the age.

Natalia Ginzburg was born in Palermo, Italy in 1916. She was an Italian author whose work explored family relationships, politics during and after the Fascist years and World War II, and philosophy. She wrote novels, short stories, and essays, for which she received the Strega Prize and Bagutta Prize. Modest and intensely reserved, Ginzburg never shied away from the traumas of history, whether writing about the Turin of her childhood, the Abruzzi countryside, or contemporary Rome all the while approaching those traumas only indirectly, through the mundane details and catastrophes of personal life. Most of her works were also translated into English and published in the United Kingdom and United States. She wrote acclaimed translations of both Proust and Flaubert into Italian. She died in Rome in 1991.

Praise for The Manzoni Family:

"[Ginzburg] re-creates the family life of Italy's great 19th-century writer with an immediacy that grips even one who has read little or none of the work of Alessandro Manzoni."—New York Times

"As social history, with something of the flavor and immediacy of fiction, this story of a famous family stretching from 1762 to 1907 is interesting and well done. The book skillfully stitches together biographical facts and numerous family letters." —Publishers Weekly

"Although Tolstoy maintained that 'happy families are all alike; every unhappy family is unhappy in its own way,' contemporary readers of this work will identify with the illnesses of children, deaths of relatives, and all-too-frequent filial requests for money that confronted Italian literary giant Alessandro Manzoni, author of I Promessi sposi. Based on the family's voluminous correspondence, Ginzburg's portrayal is personal rather than literary, focusing on Manzoni family members; but a vivid picture of 18th- and 19th-century Italy and the literary scene in 19th-century Paris also emerges." —Library Journal

“One of the Great Italian Writers of the 20th Century.”—The New York Times

"Ginzburg was famous for her ability to conjure up a mixed emotional atmosphere, poignant yet unsentimental." —The New Yorker

"A glowing light of modern Italian literature . . . Ginzburg's magic is the utter simplicity of her prose, suddenly illuminated by one word that makes a lightning streak of a plain phrase. . . . As direct and clean as if it were carved in stone, it yet speaks thoughts of the heart." — The New York Times Book Review

"Natalia Ginzburg must surely be one of literature's most provocative and moving writers." — Elle magazine

"Ginzburg draws her readers into her deceptively charming essays with cascades of alluring, everyday detail, then stealthily broaches moral questions of great weight and complexity. Wryly witty, acutely observant, and unfailingly valiant, Ginzburg is a revelation, a spur, and a joy." — Booklist

1. The Manzoni Family: A Novel

2. The Manzoni Family: A Novel

3. The Manzoni Family: A Novel

4. The Manzoni Family: A Novel

Book Description Paperback. Condition: New. Paperback. Shipping may be from multiple locations in the US or from the UK, depending on stock availability. 358 pages. 0.431. Seller Inventory # 9781611457179

6. The Manzoni Family: A Novel

9. The Manzoni Family: A Novel

Book Description Paperback. Condition: New. Paperback. Shipping may be from our Sydney, NSW warehouse or from our UK or US warehouse, depending on stock availability. 358 pages. 0.431. Seller Inventory # 9781611457179