Items related to River of the Brokenhearted: A Novel

Richards, David Adams River of the Brokenhearted: A Novel

River of the Brokenhearted: A Novel 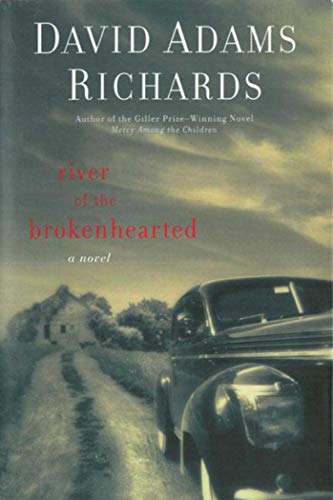 From David Adams Richards, winner of the Giller Prize and the Governor General’s Award, comes a magnificent and haunting novel about the entwinement of remembered love and unforgotten hate.

Spanning generations, River of the Brokenhearted tells the life and legacy of Janie McCleary, a strong-willed Irish Catholic girl who dares to marry a man from the Church of England. Their union is quickly deemed scandalous, and when her husband dies young, just before the Great Depression, Janie is left alone to raise a family and run a business the first movie theater in town. Through the strength of her character, she succeeds in a world of men. For that she is ostracized and becomes a victim of double-dealing and overt violence. Based on the author’s own grandmother, Janie is a pioneer before the age of feminism, but her salty individualism burdens the lives of her children and grandchildren.

Writing with compassion and mastery, Richards muses on the tyranny of memory and history, and peers into the hearts of extraordinary characters. There he finds an alchemy of venality and goodwill, deceit and brotherliness, marked cruelty and true love. Once again, David Adams Richards has brought us a work of astonishing grace, rooted in his special territory on the great river Miramichi of New Brunswick, but firmly universal in scope.

Set in a small town on a river in New Brunswick, River of the Brokenhearted, David Adams Richards's first novel since his Giller Prize-winning Mercy Among the Children, is told by Wendell King, son of Miles King and grandson of the feisty, willful Janie McLeary King, who made her fortune running the town's first cinema. Set against this trio is the lower-class family of the Drukens, especially Rebecca Druken and her uncle, Joey Elias, bitter because their own early cinema failed. Established early on, the feud plays out across three generations, spanning successes, failures, murder, and dissolution. Yet despite the somewhat bleak subject matter, tremendous humour and vitality persist in this story. The characters leap off the page, and in the person of Miles King, Richards has imagined a fully human soul of stunning believability. Miles is fatally flawed, committing slow suicide by gin as his cinema too begins to fail in the face of the TV's small screen. A sensitive eccentric, a target of small-town narrowness, he is subtly tortured psychically, for years, by Elias and the vicious Rebecca, who have made the downfall of the Kings their life's ambition. Miles King is a character of great loneliness, pathos, humor, and compassion, one of the finest creations not only of Canadian writing but any literature.

River of the Brokenhearted is the story of a river, the Miramichi, but it is mostly about the river of time that passes through Miles King, his mother, his son, and their enemies, carrying all to their ultimate fates: "She had left a river in New Brunswick that would swallow you with its life, shout in its rapids, laugh in its eddies, create industry in its currents, a river of Irish and Scottish myth, wedded to the soil." An outstanding work of fiction. --Mark Frutkin

In the 1920s, Janie McLeary and George King run one of the first movie theatres in the Maritimes. The marriage of the young Irish Catholic woman to an older English man is thought scandalous, but they work happily together, playing music to accompany the films. When George succumbs to illness and dies, leaving Janie with one young child and another on the way, the unscrupulous Joey Elias tries to take over the business. But Janie guards the theatre with a shotgun, and still in mourning, re-opens it herself. ?If there was no real bliss in Janie?s life,? recounts her grandson, ?there were moments of triumph.?

One night, deceived by the bank manager and Elias into believing she will lose her mortgage, Janie resolves to go and ask for money from the Catholic houses. Elias has sent out men to stop her, so she leaps out the back window and with a broken rib she swims in the dark across the icy Miramichi River, doubting her own sanity. Yet, seeing these people swayed into immoral actions because of their desire to please others and their fear of being outcast, she thinks to herself that ??all her life she had been forced to act in a way uncommon with others? Was sanity doing what they did? And if it was, was it moral or justified to be sane??

Astonishingly, she finds herself face to face that night with influential Lord Beaverbrook, who sees in her tremendous character and saves her business. Not only does she survive, she prospers; she becomes wealthy, but ostracized. Even her own father helps Elias plot against her. Yet Janie McLeary King thwarts them and brings first-run talking pictures to the town.

Meanwhile, she employs Rebecca from the rival Druken family to look after her children. Jealous, and a protégé of Elias, Rebecca mistreats her young charges. The boy Miles longs to be a performer, but Rebecca convinces him he is hated, and he inherits his mother?s enemies. The only person who truly loves her, he is kept under his mother?s influence until, eventually, he takes a job as the theatre?s projectionist. He drinks heavily all his life, tends his flowers, and talks of things no-one believes, until the mystery at the heart of the novel finally unravels.

?At six I began to realize that my father was somewhat different,? says Miles King?s son Wendell, who narrates the saga in an attempt to find answers in the past and understand ?how I was damned.? It is a many-layered epic of rivalries, misunderstandings, rumours; the abuse of power, what weak people will do for love, and the true power of doing right; of a pioneer and her legacy in the lives of her son and grandchildren.

?David Adams Richards is perhaps the greatest Canadian writer alive,? wrote Lynn Coady in the Vancouver Sun. From this winner of the Giller Prize and the Governor General?s Award comes a story of a woman?s determined struggle against small town prejudice, and her son?s long battle against deceit. Richards? own family ran Newcastle?s Uptown Theatre from 1911 to 1980, and Janie is based on his grandmother. Cast upon this history is a drama that explores morality and ?the question of how one should live,? as The Atlantic Monthly said of Mercy Among the Children, his previous novel.

Reviewers agree that Richards? fiction sits firmly in the tradition of Tolstoy and Dostoevsky by concerning itself explicitly with good and evil and the human freedom to choose between them. Once again, in River of the Brokenhearted, his twelfth novel, Richards has created a work of compassion and assured, poetic sophistication which finds in the hearts of its characters venality and goodwill, cruelty and love.

1. River of the Brokenhearted: A Novel