Items related to Zoos in Postmodernism: Signs and Simulation

Zoos in Postmodernism: Signs and Simulation 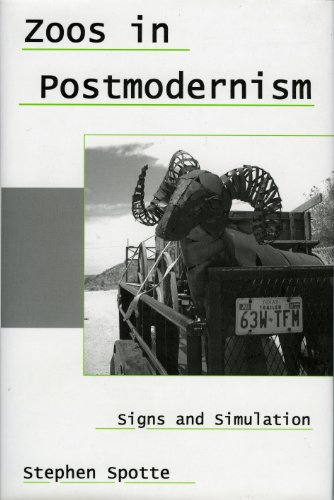 In his provocative new book, Zoos in Postmodernism: Signs and Simulation, marine biologist Stephen Spotte lumps together public aquariums and zoological parks (which he collectively calls zoos) and treats them as cultural derivatives assessable using semiotics (the study of signs and their meanings) and Baudrillard's models of simulation. He concludes that only modernist zoos can exist in postmodern times, making captive animal displays anachronistic. Today's zoos are thus reminiscent of an era generally agreed to have ended with the 1950s. Unable to evolve and compete with contemporary entertainments, they can only be spectacles viewed passively.

[I]nvestigates the cultural ramifications of. . .zoos. . . .Spotte. . .is nothing if not thorough. . . .  This extensive. . .touch has led [him] to expound a number of theories. . .sometimes in great detail. . . .Spotte avoids the snobbish attitude of many cultural theorists by making sure that the reader is aware of what he is referring to. . . .The analysis is sharp and convincing. . . .[T]he book is interesting, creative, thorough, extensive and an important contribution. . . .presenting the reader with a stimulating analysis. -- Elisa Aaltola, Environmental Values 16: 536-538, 2007

Spotte. . .uses semiotics. . .to treat marine parks and [zoos] as cultural derivatives.  He argues that such attractions can never reproduce nature because humans exist apart. . . .The sign having been decoupled from nature (its referent) results in animals that are [only] semiotically real.  [Thus] zoos. . .cannot claim they teach humans anything about wildness and nature, [and] what we take to be real. . .is increasingly becoming miniature versions of. . .science fiction films; critiques of art, literature, photography and science surely follow. -- Anonymous, SiTech Book News 30(2): 46, 2006

An important element of Spotte's book is its interdisciplinarity. . . .While the tendency has been for scientists to reject so-called "constructionist" approaches - and their refusal of the Natural as a foundational source of authenticity and value - as undermining the "reality" of nature, Spotte. . .refreshingly takes the opposite tack, turning to the humanities in order to understand zoos. . . . -- Matthew Chrulew, Society and Animals 18: 97-100, 2010

Spotte. . .uses semiotics (the study of signs and their meaning) and Baudrillard's models of simulation to propose that zoos are anachronistic and out of place in modern society.  This volume is unusual because it attempts to use postmodernism to understand biology.  The relationship between these areas is not harmonious, and both are segregated in academia.  More integration is needed and, on this point, the book is praised. -- Gareth Davey, Quarterly Review of Biology 82: 65, 2007

1. Zoos in Postmodernism: Signs and Simulation

2. Zoos in Postmodernism: Signs and Simulation