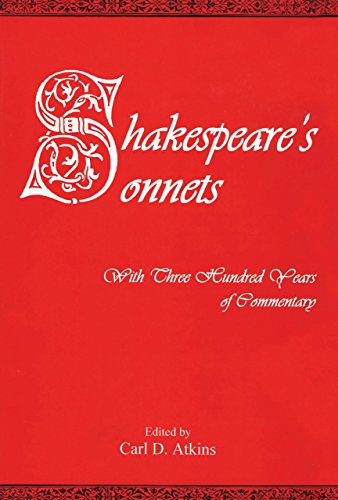 This is the first edition of Shakespeare's Sonnets in over sixty years to bring together the commentary of various scholars. Atkins is the first to collate the seventeen scholarly editions of The Sonnets published since Rollins's New Variorum of 1944 so that substantive differences among them can be fully appreciated and compared. He has culled the most important commentary and emendations of Shakespeare's editors from Gildon (1710) to Mowat and Werstine (2004). The discussion of meter and verse is more substantial than can be found in any other edition, a feature that adds particular dimension to this text.

Since the last edition, the study of The Sonnets has advanced significantly so that the issues discussed are freshly relevant. Each of the modern editions newly collated in this book has had a different approach. With few exceptions, however, previous commentary is given short shrift in each successive edition so that the reader of any one edition obtains only a small glimpse of the range of thought available on The Sonnets. This edition gives access in one volume to all the commentary, modern and time-honored, with which to interpret and appreciate these glorious poems. Atkins synthesizes this work and brings his own perspective and freshness to the field, adding to the long tradition of quality scholarship in Shakespeare studies.

Each sonnet is presented exactly as printed in 1609. The original spelling and punctuation are maintained, the latter being an important guide to meaning and rhythm that is too often destroyed by modernizing editors. Textual notes documenting the emendations recommended by modern editors follow the text. Atkins includes his own conservative recommendations in his notes, the first editor to base decisions about emendations on bibliographic principles, using our knowledge of printing methods in Shakespeare's day to determine the likelihood of particular printing errors. Glosses of difficult words and phrases follow, mostly chosen from among Sh

Carl D. Atkins has been a practicing medical oncologist in Rockville Centre, New York for more than twenty years. Dr. Atkins has maintained his love for Shakespeare, especially his sonnets, and brings to this book a devotion to meticulous scholarship.