Items related to Every Trick in the Book: A Novel Idea Mystery (Novel... 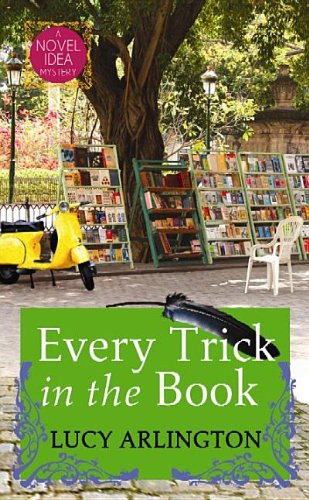 The national bestselling Novel Idea Mysteries return with Lila Wilkins, who has just been promoted to full-time literary agent. But great new writers aren’t the only people she’s trying to catch.

Lucy Arlington is an avid reader, cook, and gardener. If she had her way, she'd divide her time between preparing delectables in her kitchen, traveling the globe on her scooter, and sitting in a comfortable chair with a cup of coffee and a paperback until her legs cramped. Lucy is devoted to her husband and children - especially when they ply her with chocolate and gift cards to bookstores.

Lila is settling into her new job as a literary agent and preparing to take her first live pitches at a book-and-author festival in Inspiration Valley, North Carolina. At the festival, she meets an editor who looks just like her. When her new friend is killed at the event, Lila feels compelled to find answers. Shortly thereafter, an author is killed in her home, and while the crimes seem unrelated, two literary murders in one small town strike Lila as too much of coincidence. In between reading queries and trying to sell manuscripts, Lila looks for a connection between the murders. Meanwhile, she is also trying to get closer to lawman boyfriend Sean and to support her son, Trey, as he struggles with the life he chose on a co-op. The humorous commentary on the publishing business, along with a strong subplot about Trey, makes this second in the Novel Ideas series (following Buried in a Book, 2012) a layered and enjoyable read. --Amy Alessio

1. Every Trick in the Book (Large Print)