Items related to One Plus One: A Novel

Jojo Moyes One Plus One: A Novel

One Plus One: A Novel 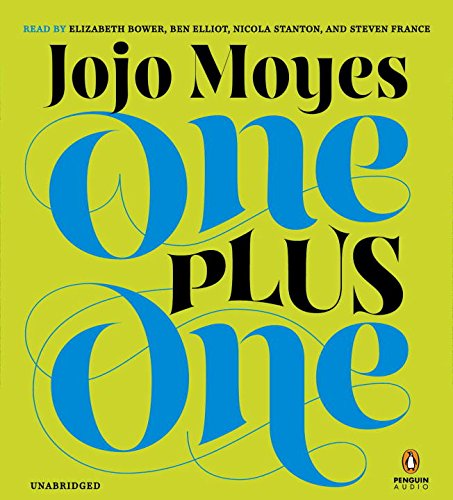 One single mom. One chaotic family. One quirky stranger. One irresistible love story from the New York Times bestselling author of Me Before You

American audiences have fallen in love with Jojo Moyes. Ever since she debuted stateside, she has captivated readers and reviewers alike, and hit the New York Times bestseller list with the word-of-mouth sensation, Me Before You. Now, with One Plus One, she’s written another contemporary opposites-attract love story that reads like a modern-day Two for the Road.

Suppose your life sucks. A lot. Your husband has done a vanishing act, your teenage stepson is being bullied and your math whiz daughter has a once-in-a-lifetime opportunity that you can’t afford to pay for. That’s Jess’s life in a nutshell—until an unexpected knight-in-shining-armor offers to rescue them. Only Jess’s knight turns out to be Geeky Ed, the obnoxious tech millionaire whose vacation home she happens to clean. But Ed has big problems of his own, and driving the dysfunctional family to the Math Olympiad feels like his first unselfish act in ages . . . maybe ever.

One Plus One is Jojo Moyes at her astounding best. You’ll laugh, you’ll weep, and when you flip the last page, you’ll want to start all over again.

Jojo Moyes is the internationally bestselling author of Me Before You, The Girl You Left Behind, and The Last Letter from Your Lover, among others. She is married to Charles Arthur, technology editor of The Guardian, and lives with their three children on a farm in Essex, England.

***This excerpt is from an advance uncorrected proof***

Ed Nicholls was in the creatives’ room drinking coffee with Ronan when Sidney walked in. A man he vaguely recognized stood behind him, another of the Suits.

Ed studied them for a minute, then threw a red foam ball at the ceiling and caught it. He glanced sideways at Ronan. Investacorp had bought half shares in the company a full eighteen months ago, but Ed and Ronan still thought of them as the Suits. It was one of the kinder things they called them in private.

“Do you know a woman called Deanna Lewis?” “Why?”

“Did you give her any information about the launch of the new software?”

Ed looked from one Suit to the other. The atmosphere was strangely charged. His stomach, a packed elevator, began a slow descent toward his feet. “We may have chatted about work. No specifics that I re- member.”

“You need to be clear about this, Ed. Did you give her any information about the launch of SFAX?”

“The police are downstairs searching your office, with two goons from the Financial Services Authority. Her brother has been arrested for insider trading. On the basis of information that you gave them about the launch of the software.”

“Deanna Lewis? Our Deanna Lewis?” Ronan began to wipe his spectacles, a thing he did when he was feeling anxious.

“Her brother’s hedge fund made two point six million dollars on the first day of trading. She alone cleared a hundred and ninety thou- sand on her personal account.”

“I’ll spell it out. Deanna Lewis is on record talking to her brother about the launch of SFAX. She says Ed here said it was going to be enormous. And guess what? Two days later her brother’s fund is among the biggest purchasers of shares. What exactly did you tell her?”

Ronan stared at him. Ed struggled to gather his thoughts. When he swallowed, it was shamefully audible. Across the office the development team was peering over the tops of their cubicles. “I didn’t tell her anything.” He blinked. “I don’t know. I might have said some- thing. It’s not like it was a state secret.”

“It was a fucking state secret, Ed,” Sidney said. “It’s called insider trading. She told him you gave her dates, times. You told her the company was going to make a fortune.”

“You wanted to bone the girl, so you shot your mouth off to impress her?”

“You had sex with Deanna Lewis?” Ed could feel Ronan’s myopic gaze burning into him.

Sidney lifted his hands. “You need to call your lawyer.”

“How can I be in trouble?” Ed asked. “It’s not like I got any benefit from it. I didn’t even know her brother had a hedge fund.”

Sidney glanced behind him. The faces suddenly found something

interesting to look at on their desks. He lowered his voice. “You have to go now. They want to interview you at the police station.”

“What? This is nuts. I’ve got a software meeting in twenty minutes. I’m not going to any police station.”

“And obviously we’re suspending you until we’ve got to the bot- tom of this.”

Ed half laughed. “Are you kidding me? You can’t suspend me. It’s my company.” He threw the foam ball up in the air and caught it, turning away from them. Nobody moved. “I’m not going. This is our company. Tell them, Ronan.”

He looked at Ronan, but Ronan was staring fixedly at something on the floor. Ed looked at Sidney, who shook his head. Then he looked up at the two uniformed men who had appeared behind him, at his secretary, whose hand was covering her mouth, at the carpet path already opening up between him and the door, and the foam ball dropped silently onto the floor between his feet.