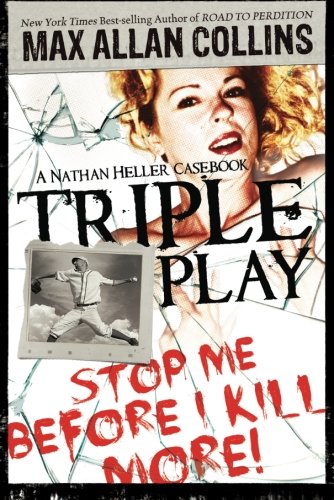 Since his introduction in 1983’s True Detective, Chicago-based private eye Nathan Heller has handily earned his spot alongside American crime-fiction greats Phillip Marlowe, Archie Goodwin, and Mike Hammer. Now the classic gumshoe is back in this collection of three novellas, all based on real cases of the 1940s, ’50s, and ’60s. In Dying in the Post-War World, Heller returns from combat to find his marriage a shambles and himself square in the middle of the notorious Lipstick Killer case of 1946. Kisses of Death follows the PI into the 1950s, when he is hired to guard Marilyn Monroe. The famous starlet’s intellectual pursuits eventually take Heller to Greenwich Village and a grisly murder. And in Strike Zone, Heller is hired by zany baseball boss Bill Veeck to investigate the 1961 murder of a famous pinch hitter, whose private life will suck Nate into a dangerous new world of little people and big sins. With Triple Play, New York Times-bestselling author Max Allan Collins has pried back the lid of history to reveal the ugly, entertaining truth behind three of the twentieth century’s most shocking crimes.

Max Allan Collins has earned fifteen Private Eye Writers of America “Shamus” nominations, winning for his Nathan Heller novels, True Detective and Stolen Away, and receiving the PWA life achievement award, the Eye. His graphic novel, Road to Perdition, the basis for the Academy Award-winning film starring Tom Hanks, was followed by two novels, Road to Purgatory and Road to Paradise. His suspense series include Quarry, Nolan, Mallory, and Eliot Ness, and his numerous comics credits include the syndicated Dick Tracy and his own Ms. Tree. He has written and directed four feature films and two documentaries. His other produced screenplays include “The Expert,” an HBO World Premiere, and “The Last Lullaby.” His coffee-table book The History of Mystery received nominations for every major mystery award and Men’s Adventure Magazines won the Anthony. Collins lives in Muscatine, Iowa, with his wife, writer Barbara Collins. They have collaborated on seven novels and are currently writing the “Trash ‘n’ Treasures” mysteries.

"If like me, you’re a Nathan Heller fan, then you have to pick this up. If you are one of those yet to have encountered Collins’ pragmatic, world-weary hero then we can’t think of a better way to make that introduction. Triple Play, is very much a grand slam, no matter what your favorite sport is." Ron Fortier, Pulp Fiction Reviews