Items related to The Heart of a Dog

Bulgakov, Mikhail The Heart of a Dog 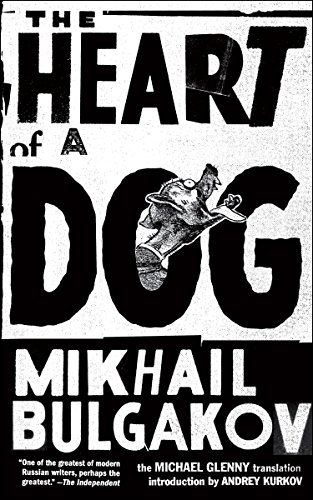 A new edition of Bulgakov’s fantastical precursor to The Master and Margarita, part of Melville House’s reissue of the Bulgakov backlist in Michael Glenny’s celebrated translations.

A key work of early modernism, this is the superbly comic story of a Soviet scientist and a scroungy Moscow mongrel named Sharik. Attempting a medical first, the scientist transplants the glands of a petty criminal into the dog and, with that, turns a distinctly worryingly human animal loose on the city. The new, lecherous, vulgar, Engels-spouting Sharik soon finds his niche in govenrmental bureaucracy as the official in charge of purging the city of cats.

A Frankenstein fable that’s as funny as it is terrifying, Heart of a Dog has also been read as a fierce parable of the Russian Revolution. It was rejected for publication by the censors in 1925, and circulated in samizdat for years until Michael Glenny translated it into English in 1968—long before it was allowed to be officially published in the Soviet Union. That happened only in 1987, although till this day the book remains one of Mikhail Bulgakov’s most controversial novels in his native country.

MIKHAIL BULGAKOV was born in Kiev on May 15th 1891. He graduated as a doctor but gave up the practice of medicine in 1920 to devote himself to literature. He went on to write some of the greatest novels in twentieth century Russian literature, including The White Guard, Heart of a Dog, and his masterpiece, The Master and Margarita. He died in Moscow of kidney disease in 1940.

MICHAEL GLENNY (1927-1990) was one of the world's leading translators of Russian literature, translating the works of Gogol and Dostoevsky. But he was also famous for bringing the works of then-lesser-known dissident writers to the fore, including Aleksandr Solzhenitsyn and Georgi Vladimov. He was the first person to translate Mikhail Bulgakov into English.

“As high-spirited as it is pointed. Unlike so much satire, it has a splendid sense
of fun.” —Eileen Battersby, Irish Times

“Bulgakov here assaults the dour utilitarian lives of Soviet citizens with a defiant,
boisterous display of nonsense.”  —The Times

“One of the greatest of modern Russian writers, perhaps the greatest.” —Nigel Jones, Independent