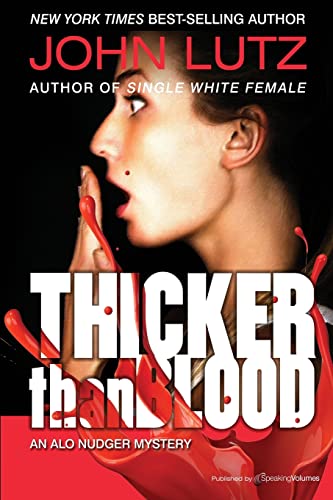 Edgar Award-winning author John Lutz returns with his newest Alo Nudger mystery—Thicker Than Blood. When shy, country girl-woman Norva Beane hires Nudger to investigate a possible securities fraud, he thinks it will be a routine case. He doesn't realize it will involve a wandering daughter, drug dealers, a dangerous, tattooed muscle-man, a dysfunctional family, and a poignant past that refuses to release its grip on anyone involved.

Nudger, his lady love Claudia Bettencourt, and his friends Lieutenant Jack Hammersmith and Danny Evers are all touched by a tragedy that continues to unfold in surprising directions no matter how hard Nudger tries to stop it. The suspense becomes riveting as trouble builds and answers lead to more questions and more danger.

In Thicker Than Blood, the nervous, antacid-chewing detective finds himself embroiled in his most perilous and fascinating case, and one that his readers aren't likely to forget.

NEW YORK TIMES BEST-SELLING AUTHOR John Lutz's work includes political suspense, private eye novels, urban suspense, humor, occult, crime caper, police procedural, espionage, historical, futuristic, amateur detective, thriller; virtually every mystery sub-genre. He is the author of more than forty novels and over 200 short stories and articles. His novels and short fiction have been translated into almost every language and adapted for almost every medium. He is a past president of both Mystery Writers of America and Private Eye Writers of America. Among his awards are the MWA Edgar, the PWA Shamus, The Trophee 813 Award for best mystery short story collection translated into the French language, the PWA Life Achievement Award, and the Short Mystery Fiction Society's Golden Derringer Lifetime Achievement Award. He is the author of two private eye series, the Nudger series, set in St. Louis, Missouri, and the Carver series, set in Florida, as well as many non-series novels. His SWF SEEKS SAME was made into the hit movie SINGLE WHITE FEMALE, starring Bridget Fonda and Jennifer Jason Leigh, and his novel THE EX was made into the HBO original movie of the same title, for which he co-authored the screenplay.

1. Thicker Than Blood: The Alo Nudger Series (Paperback or Softback)