Items related to Lords of Quarmall & Beacon to Elsewhere

Lords of Quarmall & Beacon to Elsewhere 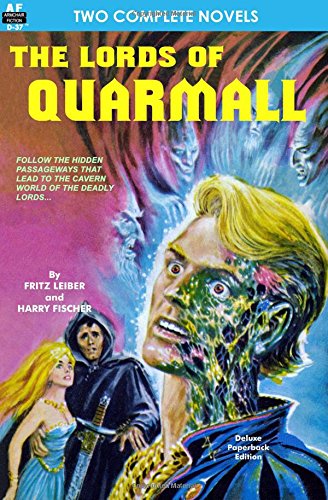 Armchair Fiction presents extra large paperback editions of classic science fiction double novels, complete with original illustrations. The first novel, “The Lords of Quarmall,” is written by Fritz Leiber and Harry Fischer. It’s about a subterranean kingdom. There are certain passageways under the earth that lead to the magicked chambers of Quarmall, where sorcerers and torturers live in endless night... Where the legends of the “Ancients” were spawned... To this labyrinth of caverns and tunnels come Fafhrd and the Gray Mouser—but differently, this time: not as comrades but combatants in a deadly dance. The second novel, “Beacon to Elsewhere,” by James H. Schmitz, features a rip in time. The forces of the Universe met at Lion Mesa, a remote desert location, where an experiment gone awry caused time and space to converge. The imposing forces were represented by the rebel Terrans; by Dowland of the Interstellar Police; and by the monstrous shapes from an alien galaxy. They all sought the same thing: the all-consuming, time-wrenching power of...the Beacon to Elsewhere..