Items related to The Old Man and Me

The Old Man and Me 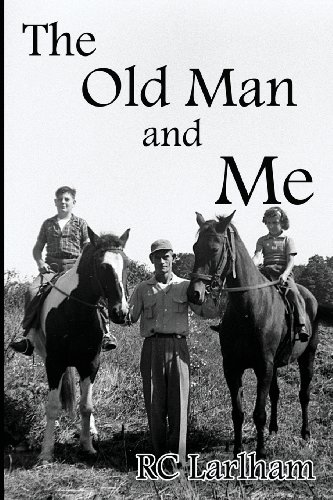 The Old Man and Me is a collection of true stories that describe with humor and love the best of the friendship that grows between a father and his son. The stories begin with vignettes from toddlerhood, and cover all the ages from then to high school graduation (and a little bit beyond). The Old Man and Me taken as a whole is a story of love and joy and growing up in a time before television became an all evening affair. There is the joy of discovering that the farm the family just bought comes with a pony, and the sorrow of the loss of a beloved pet. The stories include the best birthday a twelve-year-old boy ever had (even if it was his last one for a dozen years), and a family Christmas the reader will never forget. There is the story of a car with murder on its mind, and of a township-wide pet show that was the talk of the school. In the days of the book, boys made swords and shields, and girls played with dolls and buggies. Boys and girls explored woods and fields, and work whether chores or paid, was an escape from boredom. Hunting with the Old Man was a sport, a bonding time and a necessary supplement to what we raised and grew. He was inventive at both work and play. The stories describe the author's young life, but also stand in for thousands of father-son relationships that are never told.

"R.C. "Chuck" Larlham, has written a memoir of life with his loving, strong-willed parents... In a terrifically funny scene, a Thanksgiving turkey dinner is almost ruined, though not by a pack of hounds. His blowtorch method of painting the house aside, Dick Larlham was a man of surpassing capability, and a chapter in which he, with Chuck's help, repairs a well pump in freezing weather is mind-blowing." The Akron Beacon Journal.