Items related to A Matter of Trust (A Mia Quinn Mystery)

A Matter of Trust (A Mia Quinn Mystery) 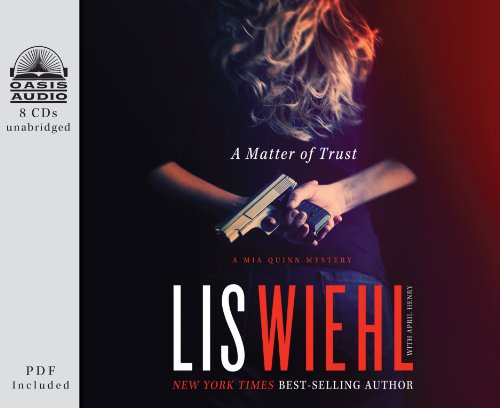 When life is murder, who can you trust? One minute Mia Quinn is in her basement, chatting on the phone with a colleague at the prosecutor’s office. The next minute there’s a gunshot over the line, and Mia listens in horror as her colleague and friend Colleen bleeds to death. Mia’s a natural for heading up the murder investigation, but these days it’s all she can do to hold her life together. As a new widow with a pile of debts, a troubled teenaged son, and a four-year-old who wakes up screaming at night, she needs more time with her family, not less — and working Colleen’s case will be especially demanding. But Colleen was her friend, and she needs to keep her job. So she reluctantly teams up with detective Charlie Carlson to investigate Colleen’s death. But the deeper they dig, the more complications unfold — even the unsettling possibility that someone may be coming after her. Lis Wiehl’s signature plot twists and relatable characters shine in this absorbing series debut . . .with an intriguing cameo from her best-selling Triple Threat series.

Lis Wiehl is a New York Times best-selling author, Harvard Law School graduate, and former federal prosecutor. A popular legal analyst and commentator for the Fox News Channel, Wiehl appears on The O’Reilly Factor and and hosts her own weekly radio program, Legal Lis. Follow her on Twitter (@LisWiehl), Facebook (facebook.com/LisWiehl), or visit liswiehlbooks.com. April Henry is a New York Times best-selling author of mysteries and thrillers. Her books have been short-listed for the Agatha Award, the Anthony Award, and the Oregon Book Award. April lives in Portland, Oregon, with her husband and daughter.

"Wiehl and Henry introduce their new series featuring Mia Quinn, a recently widowed federal prosecutor in Seattle. The first-person story  includes cutting-edge investigative techniques of murder and of online bullying that has led to a teen suicide. Narrator Eleni Pappageorge captures Mia's struggles with grief, single parenting, and the discovery of her husband's secret financial devastation. The antagonism between Mia and Charlie, the homicide detective assigned to the investigation, is delivered with a subtle humor and sensitivity that suggests a potential romance later in the series. Pappageorge's depiction of Gabe, Mia's teenage son, who is torn between the confusion of grief and wanting to belong, is insightful and true to life. Her versatile range and vocal skills perfectly render a gripping suspense with a completely unexpected ending."
G.D.W. © AudioFile 2013, Portland, Maine

1. A Matter of Trust (A Mia Quinn Mystery)