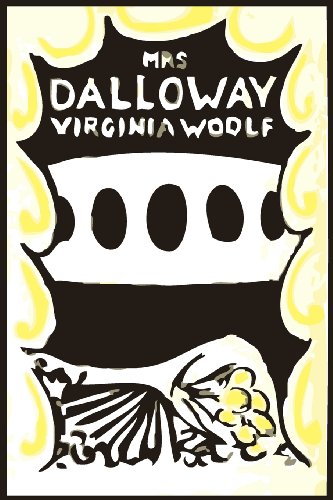 2012 Reprint of 1947 Edition. Exact facsimile of the original edition, not reproduced with Optical Recognition Software. "Mrs Dalloway" (1925) is a novel by Virginia Woolf that details a day in the life of Clarissa Dalloway, a fictional high-society woman in post-World War I England. It is one of Woolf's best-known novels. Created from two short stories, "Mrs Dalloway in Bond Street" and the unfinished "The Prime Minister", the novel's story is of Clarissa's preparations for a party of which she is to be hostess. With the interior perspective of the novel, the story travels forwards and back in time and in and out of the characters' minds to construct an image of Clarissa's life and of the inter-war social structure.

Clarissa Dalloway is civilised--without the ostentation of a socialite, but with enough distinction to attract them to her parties. She finds excess offensive, but surrounds herself with the highest quality and has an abhorrence for anything ugly or awkward. Mrs. Dalloway is as much a character study as it is a commentary on the ills and benefits society gleans from class. Through Virginia Woolf, we spend a day with Clarissa as she interacts with servants, her children, her husband, and even an ex-lover. As she plans and executes one of her celebrated parties, she reveals inner machinations incongruous with her class-defined behaviors, that ultimately enable her to transcend them.

One of the most moving, revolutionary artworks of the twentieth century (Michael Cunningham)

Woolf is Modern. She feels close to us. (Jeanette Winterson)

Book Description Paperback. Condition: GOOD. Spine creases, wear to binding and pages from reading. May contain limited notes, underlining or highlighting that does affect the text. Possible ex library copy, will have the markings and stickers associated from the library. Accessories such as CD, codes, toys, may not be included. Seller Inventory # 3236023914

Book Description Condition: Good. A+ Customer service! Satisfaction Guaranteed! Book is in Used-Good condition. Pages and cover are clean and intact. Used items may not include supplementary materials such as CDs or access codes. May show signs of minor shelf wear and contain limited notes and highlighting. Seller Inventory # 1614273219-2-4