Items related to Hearts Divided by Joanne Sundell, (The Quaker and the...

Joanne Sundell Hearts Divided by Joanne Sundell, (The Quaker and the Confederate, Book 1) from Books In Motion.com

Hearts Divided by Joanne Sundell, (The Quaker and the Confederate, Book 1) from Books In Motion.com 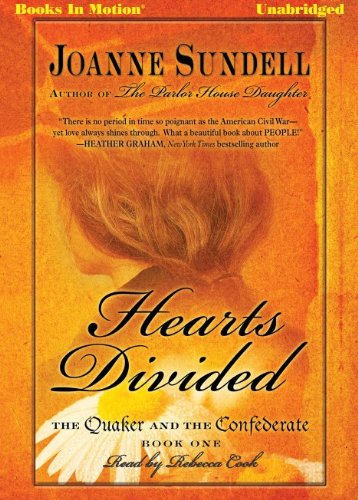 Two little girls - one white, one colored; one free, one a slave; one never afraid, the other ever looking over her shoulder - become unlikely friends in 1852, Bedford County, Virginia. Instinctively, they know they must keep their friendship a secret. Willa and Surry are both from loving families, but Surry's parents are slaves and can't protect their daughter from the plantation overseer's cruel hand. Overhearing her parents argue about bein' free, Surry asks Willa to find out what bein' free means. The answer brings heartache to both girls, their childhood innocence lost in the wake of the coming War Between the States. Across Virginia in Loudoun County, much is expected of thirteen-year-old Levi Clement. He must help run the family farm and mill, and mind his brothers. He's expected to marry Comfort Clarke when he reaches his majority age of twenty-one. Levi struggles with his urgent feelings for Comfort and his urgent feelings to fight the bullies who challenge his Quaker way of peace. He'll never raise his hand against his fellow man, never. When the war begins in earnest, in April, 1861, the lives of Willa, Surry, and Levi are broken apart, each thrown onto unimagined paths. There's no safe haven from the pain of war, except perhaps . . . finding love. In this first of a romantic series set amid the unfolding drama of the Civil War, is there a place, a moment in time, where even the most doubtful, the most impossible of relationships, might just be possible?

This historical romance, HEARTS DIVIDED (book one in The Quaker and the Confederate duet) would not have been possible without all of the historians, novelists, Civil War buffs, and internet academics, who've so ably and meticulously researched, then set pen to paper, chronicling this turbulent time in our nation's history. Beyond these resources, I had the opportunity to visit and collect invaluable archival data from rich-in-history Virginia and West Virginia bookshops and historical museums. Born and raised in Virginia, I learned early-on that the ground I trod was hallowed, the battle cries across fields such as Manassas, the Wilderness, Chancellorsville, and Harper's Ferry...still audible, if one stops to listen. My great-great-grandfathers, James Gregg and John Shackelford, fought in the war.

Like most, I've accrued a general degree of knowledge about the Civil War, but the writing of this historical romance taught me so much more. I hope to share with you, in this upcoming, two-book Civil War romantic series, what I've learned about women-soldiers masquerading as Confederates and as Yankees, the role of African Americans fighting for their cause, the treacherous plight of fugitive slaves, and the key role of the Quakers and their rich tradition in Virginia history.

On my first visit to Waterford in Loudoun County, Virginia, I felt a masterful hand take up mine the moment I began to wander the cobbled streets, and my Quaker hero was born in my head and heart. It only took one turn of the research page, reading about women soldiers in the Civil War, for my heroine to come to life and don her Confederate uniform. My research cried out for a second hero and heroine, both African Americans, to tell their love story, commanding equal consideration for their rightful place in Virginia history.

Two little girls--one white, one colored--one free, one a slave--become unlikely, secret friends in 1852, Bedford County, Virginia. When Surry asks Willa to find out what "bein' free" means, the answer brings heartache to both. Across Virginia in Loudoun County, much is expected of young Quaker, Levi Clement. When the War Between the States begins in 1861, the lives of Willa, Surry, and Levi are broken apart. There's no safe haven from the pain of war, except perhaps...finding love.