Items related to A Final Reckoning; or A Tale of Bush Life in Australia

G. A. Henty; Seth Gould A Final Reckoning; or A Tale of Bush Life in Australia

A Final Reckoning; or A Tale of Bush Life in Australia 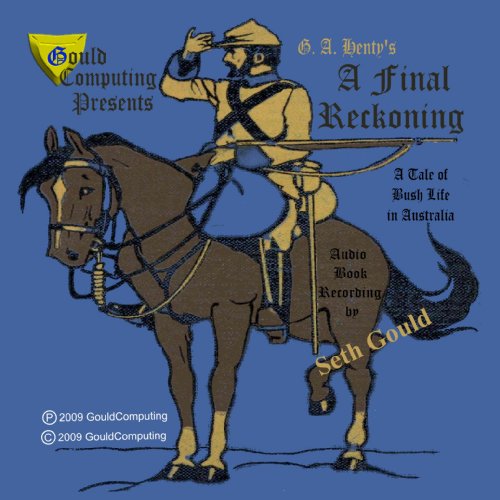 Join Henty's Hero on an adventure in Australia in the early days of its settlement, when the bush-rangers and the natives constituted a real and formidable danger. Reuben, a young English lad, after rather a stormy boyhood, emigrates to Australia, where he gets employment as an officer in the mounted police. Throughout, Reuben displays selflessness and endurance through trial. He encounters a dangerous life on the frontier, and must finally reckon with his past and an old enemy.

Recorded by Seth Gould, copyright 2009, this is the complete and unabridged edition of Henty's A Final Reckoning. This audiobook is in high quality MP3 CD format and running time is 7 hours, 31 minutes.

Henty's stories typically revolve around a fictional boy hero during fascinating and troubling periods of history. These range from ancient Egypt and the Punic Wars of Carthage and Rome, all the way through to his present day with the Dash to Khartoum and With the Allies to Peking. Henty's Heroes fight wars, conquer evil empires, sail the seas, discover land, prospect for gold, and many other exciting adventures. The meet famous personages like Sir William Wallace, Alfred the Great, Napoleon, Hannibal, Moses, Robert E. Lee, Sir Francis Drake, and many others. His heroes are diligent, courageous, intelligent, honest, resourceful and dedicated to their country and cause in the face, at times, of great peril, while also modest. His histories, particularly battle accounts, have been recognized by historian scholars for their accuracy. Many readers have gained a love of the study of history through reading of Henty's Heroes. Understanding the culture of the time period becomes second nature while also comparing and contrasting the society of various European and pagan cultures.

G. A. Henty (1832-1902), was known as The Boy's Own Historian. His life was filled with exciting adventure. Completing Westminster School, he attended Cambridge University. Along with a rigorous course of study, Henty participated in boxing, wrestling, and rowing. The strenuous study and healthy, competitive participation in sports prepared Henty to be with the British army in Crimea. Shortly before resigning from the army as a captain in 1859 he married Elizabeth Finucane. The couple had four children. Elizabeth died in 1865 after a long illness and shortly after her death Henty began writing articles for the Standard newspaper. In 1866 the newspaper sent him as their Special Correspondent to report on the Austro-Italian War where he met Giuseppe Garibaldi. He was present in Paris during the Franco-Prussian war, in Spain with the Carlists, at the opening of the Suez Canal, toured India with the Prince of Wales (later Edward VII) and took a trip to the California gold fields.


G. A. Henty's storytelling skills grew out of tales told to his own children. After dinner, he would spend an hour or two in telling them a story that would continue the next day. Some stories went on for weeks! A friend who was present one day suggested that he write down his stories so others could enjoy them. He wrote his first children's book, Out on the Pampas in 1868, naming the book's main characters after his children. Henty wrote approx. 144 books plus stories for magazines and was dubbed as The Prince of Story-Tellers and The Boy's Own Historian.


On November 16th, 1902, Henty died aboard his yacht in Weymouth Harbour shortly before he finished his last novel, By Conduct and Courage, which was completed by his son Captain C. G. Henty.


Seth Gould grew up an avid student of history, and his favorite books were Henty's historical fiction adventures. He founded GouldComputing in 2007, with a goal of providing educational games and resources for the digital age. Henty's Heroes audiobooks were recorded and edited to provide hours of listening to those on the go and to introduce Henty to non-readers.