Items related to The Way You Say

Mavison, Dar The Way You Say

The Way You Say 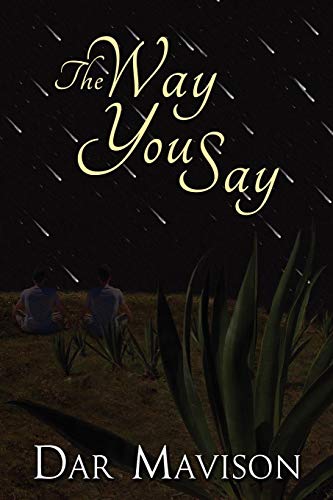 Australian adventurer Adam Yager arrives in Athens for a conference and meets a colleague from the past: Dmitri Pryce, a brilliant archaeologist, a charming individual, and a beautiful man. Adam has never found a man beautiful before, not like this, and between remembrances of the dig in Tanzania four years ago and talk of more recent work, Adam does his best to keep his arousal hidden... until he blurts out his admiration for the way Dmitri says the word "ass." And once Adam's said it out loud, it's too late to take it back. Dmitri remembers lusting after Adam four years ago with painful clarity, but he made himself get over his crush and accept Adam's friendship at face value. Now, as a documentary of the dig they both worked on is about to be released to the public, Adam clearly wants more, but Dmitri believes their opportunity to have passed. Except Adam is unwilling to miss this once in a lifetime chance to really get to know Dmitri and explore the passion they both feel.

Book Description Dreamspinner Press, LLC, 2011. Condition: Good. A+ Customer service! Satisfaction Guaranteed! Book is in Used-Good condition. Pages and cover are clean and intact. Used items may not include supplementary materials such as CDs or access codes. May show signs of minor shelf wear and contain limited notes and highlighting. Seller Inventory # 1615817190-2-4