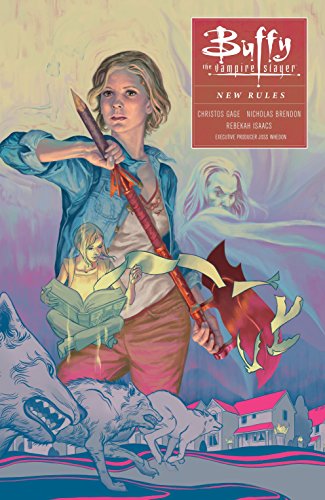 While slaying the zompires that have overrun a small California town, Buffy and her pals are shocked to discover a new kind of vampire: harder to kill, able to transform and walk in the light of day--like Dracula . . . If that weren't enough, the rules of magic are literally being rewritten. While the crew attempts to find out exactly what this means and restore the status quo, Xander is the victim of a haunting as his relationship with Dawn crumbles.

In the words of Christos Gage...
I was born in New York, then grew up in Athens, Greece and North Grafton, Massachusetts. Started reading at age 3, discovered comics soon after. First comic collected and saved: Marvel's Godzilla. Never quit comics for girls the way some flip-floppers do, though I did keep it in the closet at times, for which I am deeply ashamed.

Attended Brown University (here's a secret: the Ivy League is overrated) where I majored in American Civilization, a field that allowed me to take classes like The Blues and The Spy Novel, which have come in a lot handier in my life than algebra. Got a Master's Degree in Screenwriting from the American Film Institute.

Sold my first screenplay in 1997 and have been a professional writer ever since, with several scripts sitting on shelves gathering dust and a few actually produced. Started writing comics in December 2004.

Married to the lovely Southern firecracker Ruth Fletcher Gage, who is my writing partner in film and television, though she had enough sense to stay away from Teenage Caveman. We have plans to collaborate on two graphic novels in the future. We live with our cats, Frankie and Josie. The author lives in Los Angeles, CA..