Items related to From Tyranny to Freedom

From Tyranny to Freedom 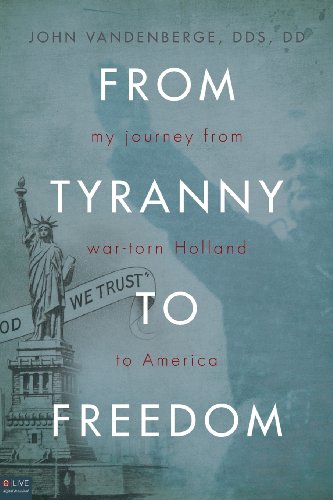 On May 10, 1940, early in the morning, my family and I were awakened by strange sounds. What in the world was that all about? Pa turned on the radio. We found out that during the night the Nazis had invaded Holland. It's been well over half a century since the devastating tragedy of World War II. Now, more than ever, it is important that we listen to and learn from the testimony, wisdom, and experiences of those who lived through the most impacting events in human history. John Vandenberge has such an account of life as a young Dutch boy in the hell of Holland during WWII and his journey From Tyranny to Freedom. Crafted with a truth that speaks not only to and of his generation but echoes volumes beyond, this tale will inspire all readers to learn from the evils of yesterday and hope for a better tomorrow. From Tyranny to Freedom: My Journey from War-torn Holland to America is his inspirational true story of hope, faith, destiny, and liberty.

1. From Tyranny to Freedom

Book Description Tate Publishing, 2010. Condition: Good. Shows some signs of wear, and may have some markings on the inside. Seller Inventory # GRP84688294

2. From Tyranny to Freedom : My Journey from War-torn Holland to America

Book Description Tate Publishing & Enterprises, LLC. Perfect Paperback. Condition: Good. A copy that has been read, but remains in clean condition. All pages are intact, and the cover is intact. The spine may show signs of wear. Pages can include limited notes and highlighting, and the copy can include previous owner inscriptions. At ThriftBooks, our motto is: Read More, Spend Less. Seller Inventory # G1616630949I3N00

3. From Tyranny to Freedom

Book Description Tate Publishing, 2010. Condition: Good. A+ Customer service! Satisfaction Guaranteed! Book is in Used-Good condition. Pages and cover are clean and intact. Used items may not include supplementary materials such as CDs or access codes. May show signs of minor shelf wear and contain limited notes and highlighting. Seller Inventory # 1616630949-2-4

4. From Tyranny to Freedom