Items related to The Boy In The Suitcase

Kaaberbol, Lene; Friis Agnete The Boy In The Suitcase

The Boy In The Suitcase 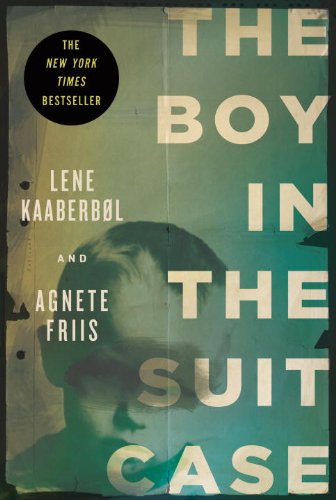 Nina Borg, a Red Cross nurse, wife, and mother of two, is a compulsive do-gooder who can't say no when someone asks for help?even when she knows better. When her estranged friend Karin leaves her a key to a public locker in the Copenhagen train station, Nina gets suckered into her most dangerous project yet. Inside the locker is a suitcase, and inside the suitcase is a three-year-old boy: naked and drugged, but alive.

Is the boy a victim of child trafficking? Can he be turned over to authorities, or will they only return him to whoever sold him? When Karin is discovered brutally murdered, Nina realizes that her life and the boy's are in jeopardy, too. In an increasingly desperate trek across Denmark, Nina tries to figure out who the boy is, where he belongs, and who exactly is trying to hunt him down.

Lene Kaaberbøl and Agnete Friis are the Danish duo behind the Nina Borg series. Friis is a journalist by training, while Kaaberbøl has been a professional writer since the age of 15, with more than 2 million books sold worldwide. Their first collaboration, The Boy in the Suitcase, was a New York Times and USA Today bestseller, and has been translated into 27 languages.

Holding the glass door open with her hip, she dragged the
suitcase into the stairwell leading down to the underground
parking lot. Sweat trickled down her chest and back beneath her
T-shirt; it was only slightly cooler here than outside in the shimmering
heat of the airless streets. The strong smell of decaying fast food from
a jettisoned burger bag did nothing to improve the flavor of the place.

There was no elevator. Step by step she manhandled the heavy suitcase
down to the level where she was parked, then realized that she
didn’t really want it in her car until she knew what was in it. She found
a relatively private spot behind some dumpsters, sheltered from security
cameras and the curious gazes of passersby. The case wasn’t locked,
just held closed by two clasps and a heavy-duty strap. Her hands were
shaking, and one of them was numb and bloodless from carrying the
ungainly weight for such a distance. But she managed to unbuckle the
strap and unsnap the locks.

In the suitcase was a boy: naked, fair-haired, rather thin, about three
years old. The shock rocked her back on her heels so that she fell against
the rough plastic surface of the dumpster. His knees rested against his
chest, as if someone had folded him up like a shirt. Otherwise he would
not have fit, she supposed. His eyes were closed, and his skin shone
palely in the bluish glare of the fluorescent ceiling lights. Not until she
saw his lips part slightly did she realize he was alive.

The house sat on the brink of a cliff, with an unhindered
view of the bay. Jan knew perfectly well what the locals
called it: the Fortress. But that was not why he looked at the white
walls with a vague sense of dissatisfaction. The locals could think
what they liked; they weren’t the ones who mattered.

The house was of course designed by a well-known architect,
and modern, in a functional-classical way, a modern take on the
Swedish “funkis” trend. Neo-funkis. That’s what Anne called it,
and she had shown him pictures and other houses until he understood,
or understood some of it, at least. Straight lines, no decoration.
The view was meant to speak for itself, through the huge
windows that drew the light and the surrounding beauty into the
room. That was how the architect had put it, and Jan could see
his point, everything new and pure and right. Jan had bought the
grounds and had the old summer cottage torn down; he had battled
the municipal committee until they realized that they most
certainly did want him as a taxpayer here and gave the necessary
permissions; he had even conquered the representative of the local
Nature Society with a donation that nearly made her choke on her
herbal tea. But why should he not establish a wildlife preserve? He
had no interest in other people’s building here, or tramping all over
the place in annoying picnic herds. So there it was, his house, protected
by white walls, airy and bright, and with clean uncluttered
neo-funkis lines. Just the way he had wanted it.

And yet, it was not what he wanted. This was not how it was supposed
to be. He still thought of the other place with a strange, unfocused
longing. A big old pile, an unappealing mix of decaying 1912
nouveau-riche and appallingly ugly sixties additions, and snobbily
expensive because it was on Strandvejen, the coast-hugging residences
of the Copenhagen financial elite. But that was not why he
had wanted it—zip codes meant nothing to him. Its attraction was
its nearness to Anne’s childhood home, just on the other side of the
tall unkempt whitethorn hedge. He couldn’t help but imagine it
all: The large family gathered for barbecues under the apple trees,
he and Anne’s father in a cloud of Virginia tobacco, holding chunky
tumblers of a very good Scotch. Anne’s siblings by the long white
patio table, with their children. Anne’s mother in the swing seat, a
beautiful Indian shawl around her shoulders. His and Anne’s children,
four or five, he had imagined, with the youngest asleep in
Anne’s lap. Most of all, Anne happy, relaxed, and smiling. Gathered
for the Midsummer festival, perhaps, with a bonfire of their own,
and yet enough of them there so that the singing sounded right.
Or just some ordinary Thursday, because they felt like it, and there
had been fresh shrimp on the pier that day.

He drew hungrily at his cigarette, looking out across the bay.
The water was a sullen dark blue, streaked with foam, and the wind
tore at his hair and made his eyes water. He had even persuaded
the owner to sell. The papers were there, ready for his signature.
But she had said no.

He didn’t get it. It was her family, damn it. Weren’t women supposed
to care about such things? The nearness, the roots, the closeknit
relations? All that stuff. And with a family like Anne’s, so . . .
right. Healthy. Loving. Strong. Keld and Inger, still obviously in love
after nearly forty years. Anne’s brothers, who came to the house regularly,
sometimes with their own wives and children, other times
alone, just dropping in because they both still played tennis at the
old club. To become part of that, in such an easy, everyday manner,
just next door, on the other side of the hedge . . . how could
she turn that down? But she did. Quietly, stubbornly, in true Annefashion,
without arguments or reasons why. Just no.

So now here they were. This was where they lived, he and she
and Aleksander, on the edge of a cliff. The wind howled around the
white walls whenever the direction was northwesterly, and they
were alone. Much too far away to just drop in, not part of things,
with no share in that easy, warm family communion except by special
arrangement now and then, four or five times a year.

He took a last drag and tossed the cigarette away, stepping on
the butt to make sure the dry grass didn’t catch fire. He stood for a
few minutes, letting the wind whip away the smell from his clothes
and hair. Anne didn’t know that he had started smoking again.
He took the photo from his wallet. He kept it there because
he knew Anne was much too well raised to go snooping through
his pockets. He probably should have gotten rid of it, but he just
needed to look at it sometimes, needed to feel the mixture of hope
and terror it inspired.

The boy was looking straight into the camera. His bare shoulders
were drawn forward, as if he hunched himself against some
unseen danger. There were no real clues to where the photo had
been taken; the details were lost in the darkness behind him. At
the corner of his mouth, one could see traces of something he had
just eaten. It might be chocolate.

Jan touched the picture with one forefinger, very gently. Then
he carefully put the photo away again. They had sent him a mobile
phone, an old Nokia, which he would never himself have bought.
Probably stolen, he thought. He dialed the number, and waited for
the reply.

“Mr. Marquart.” The voice was polite, but accented. “Hello.
Have you decided?”

In spite of having made his decision, he hesitated. Finally the
voice had to prod him on.

He cleared his throat.

“Good. Here are your instructions.”

He listened to the brief, precise sentences, wrote down numbers
and figures. He was polite, like the man on the phone. It was
only after the conversation had ended that he could no longer contain
his disgust and defiance. Furiously, he flung the phone away;
it arced over the fence to bounce and disappear on the heathered
slope beneath him.

He got back into his car and drove the rest of the way up to the
house.


Less than an hour later, he was crawling about on the slope,
looking for the damn thing. Anne came out onto the terrace in
front of the house and leaned over the railing.

“What are you doing?” she shouted.

“I dropped something,” he called back.

“Do you want me to come down and help?”

She stayed out there for a while. The wind tore at her peach-colored
linen dress, and the updraft blew her fair shoulder-length
hair up around her face, so that it looked as if she were falling. In
free fall without a parachute, he thought, only to check that chain
of thought before it could continue. It would be all right. Anne
would never need to know.

It took him nearly an hour and a half to find the stupid phone.
And then he had to call the airline. This was one trip he had no
wish to let his secretary book for him.

“Where are you going?” asked Anne.

“Just a quick trip to Zurich.”

“No,” he said hastily. Fear had flooded into her eyes instantly,
and trying to calm it was a knee-jerk reaction. “It’s just a business
thing. Some funds I need to arrange. I’ll be back by Monday.”

How had they ended up like this? He suddenly recalled with
great intensity that Saturday in May more than ten years ago when
he had watched Keld walk her up the aisle. She had been fairytale
pretty, in a stunningly simple white dress, pink and white rosebuds
in her hair. He knew at once that the bouquet he had chosen was
much too big and garish, but it hadn’t mattered. He was just a few
minutes away from hearing her say “I do.” For a...

1. Boy in the Suitcase, The: A Nina Borg Thriller

2. Boy in the Suitcase, The: A Nina Borg Thriller

3. The Boy in the Suitcase

4. Boy In The Suitcase